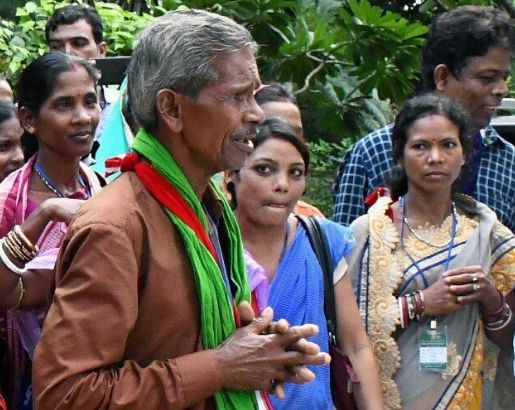 New Delhi/Bhubaneswar: This 70-year-old farmer from Odisha’s Keonjhar district caught the nation’s attention when he carved out a 3-km-long canal through a mountain with a hoe and a crowbar.

After being conferred with the Padma Shri in January, he was again in the news on Sunday when Prime Minister Narendra Modi mentioned and praised “Canal Man of Odisha” Daitari Naik in his “Mann Ki Baat” radio programme. Daitari’s priceless efforts helped irrigate 100 acres of land in his village.

“He has not been nicknamed the ‘Canal Man of Odisha’ for nothing. He chiselled a 3-km-long canal through the mountain literally with his hands to tide over the problem of irrigation,” the Prime Minister said.

Cricketer VVS Laxman had earlier taken to Twitter to salute Daitari after his exemplary contribution was recognised and he was honoured with the Padma Shri.

Daitari decided to carve out the canal as people of Talabaitarani, where he resides, suffered for lack irrigation facilities. It took him 22 years to cut through the mountain and finally in 2018, he could bring water from the Karatakata Nullah of Gupta Ganga to irrigate around 100 acres of land in his village. His three brothers and two nephews helped him in this task.

Modi also saluted the wife of Pulwama martyr Prasanna Sahu of Jagatsinghpur district for her vow to send her only son to join the CRPF.

The Prime Minister spoke about the soon-to-be-opened National War Memorial for jawans who died protecting the country and how the Army gave a “befitting” reply within 100 hours of the Pulwama attack. He also remembered Bhagwan Birsa Munda’s contribution to India’s freedom movement.

3 Killed, 4 Injured In Road Mishaps At Different Places In Odisha