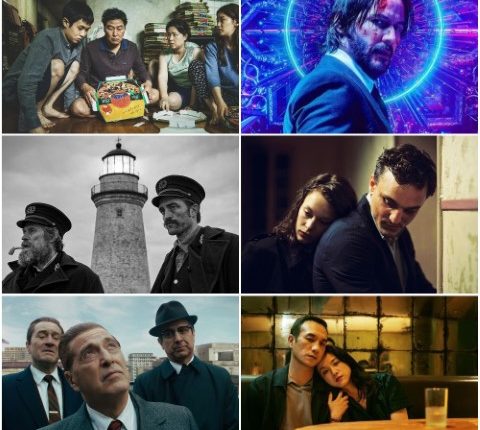 This year a common theme amongst a lot of films that made it to the year-end lists is the use of long takes with almost no dialogues and using mood and tone to define the scene. Anyway, three Chinese films did that and they are all pretty great. 2019 also saw Malayalam film industry leading the way, a popcorn-worthy epic fight between Martin Scorcese and Marvel films which Scorcese won (I think) in reel life, a disaster movie about alligators that turned unexpectedly gripping, Brad Pitt proving that he is not just a pretty face, unconventional love stories (looking at you Assam) and Koreans reminding us why they make the best goddamn thriller movies in the world.

Don’t know why but I love brilliantly choreographed fight scenes between movie couples because they resonate so much with real life. Marriage Story has a great one that I watched twice on the loop. But it also has some tender moments like all Noah Baumbach films. The acting is incredible and one can expect at least three Oscar nominations. Laura Dern is aging like wine.

At almost 4 hours long, it ambles at a sedative pace with extremely long takes of silence, brooding and feeling the environment but the plot is interesting enough to never bore. This is the first and only film of director Hu Bo (a protégé of Bela Tarr) who committed suicide soon after finishing the film. Four protagonists in northern China try to unburden themselves of guilt, shame and loneliness. There is a real philosophical vibe about it.

This is one of the rare franchises where every sequel has been better than its prequel (normally the opposite happens). Keanu Reeves doesn’t have range but he is great at what he does, especially playing a particular type of aloof, apathetic, unforgiving hero archetype. Credit to Chad Stahelski for surprising the viewers after three films and not reducing the writing to boilerplate even when you come to expect the stop-dead-on-your-tracks action scenes. Spoiler: Some dogs are again killed.

If you have seen Robert Eggers The Witch, then this is a bit of a disappointment but still quite good because of the tempestuous performances of the two leads. The shots are amazing and there is an eerie early 1900s horror like quality with the square aspect ratio and use of light and dark. You have to read up on Greek mythology to understand what’s going on. I am guessing this one will polarise a lot of people and that is understandable.

Goodfellas was a bit comical and Casino was over the top whereas The Irishman is a Greek tragedy set in the alleys and hotels of Pennsylvania. It is a character study and is very much in line with the Scorcese way of focusing on one person’s journey like the Aviator and Taxi Driver. The true mark of all great films is when the end credits roll and you still keep on listening to the music and ponder about the performances you just watched.

It is no secret that India’s reputation is one of the least enviable when it comes to women safety. Two policewomen develop a strong friendship and admiration as they try to grapple with a cruel city full of dismissive men and degenerate eve teasers. A very realistic slow-burn take on a social issue; the objective is not to find any answers or preach but just to observe and present what women go through.

I would always recommend sleeping over a movie and waiting before you form an opinion or write about it as sometimes it takes time for the emotions to surface as your brain tries to unravel what you saw. This film demands multiple viewing to make sense of the disjointed plot and convoluted timelines. There are obvious comparisons with Mulholland Drive what with the dream sequence but this one had a more calming presence. Probably my favourite ending of any film in 2019.

First things first. The cinematography and sound editing is the best in any Indian movie this year and should win every award. Unfortunately I could not watch it in a big theatre as it was meant to be watched. Jallikattu is a pulsating energetic thriller and the bizarre insane nature of the events as life in a countryside in Kerala gets overturned upside down because of a bull running amok is glorious to withhold. Lijo Jose Pellissery is a master at controlled pandemonium and his last three films should make all best end of decade lists. The lines between man and beast, and beast and man blur as Orwell’s Animal Farm expounds.

Transit is a more depressing version of Casablanca. A fugitive living under a totalitarian regime takes a false identity as he tries to flee to a better life. Transit is part romantic, part existential and part Nazi-survivor war story. There is an ever present sense of dread and the ending captures the whole temper of the film.

For a good length of the running time into the film, I assumed I was watching a comedy. The tone shift to dark comedy and then to full blown thriller territory was pleasantly shocking. Parasite is a satirical reading on class struggle and class hegemony. There are no likeable characters and you would both empathise and chastise the protagonists. I guess it all depends on where you are yourself in the social ladder.