HeartFeltFeatured
By Elisa Patnaik On Oct 19, 2021 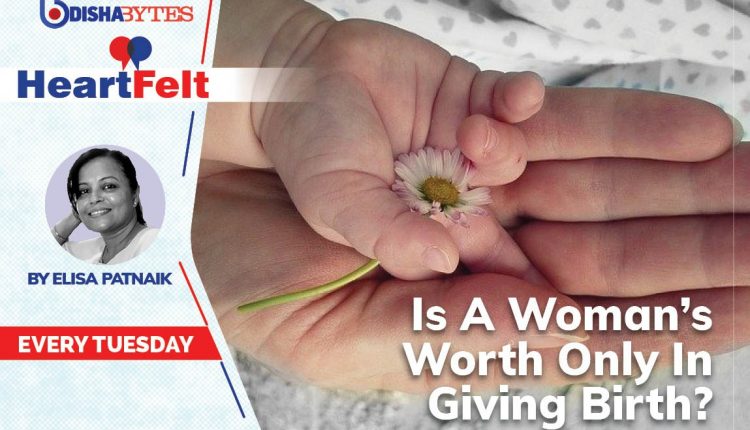 Thousands of women in India become pregnant every day. Many of them multiple times over their course of life. Several of them suffer from pregnancy and child birth-related complications. More than a few also die giving birth.

If one refers to statistics, every day 67,385 babies are born in India, which is one sixth of the world’s child births. Till a few years ago, India had one of the highest Maternal Mortality Rates in the world. Two-thirds of all maternal deaths in our country is due to severe bleeding and infections after childbirth, high blood pressure during pregnancy and complications from delivery and unsafe abortions. In addition, pregnancy-related complications are the number one cause of death among girls between 15 and 19 years of age.

Also interestingly, according to a report by Unicef, the highest numbers of births nine months since the COVID pandemic, was expected to occur in India, where 20.1 million babies were projected to be born between March 11 and December 16, 2020.

And yet, we repeatedly hear that Indian women do not want to bear children! And that they don’t want to get pregnant so that their figures and careers don’t get ‘spoiled’! Karnataka Health Minister Dr K Sudhakar’s latest claim that modern Indian women want to stay single and are unwilling to give birth even after marriage and desire children by surrogacy and that it is “not a good thing” – is the most recent example of the prevailing sexism and patriarchy in our society.

In another recent instance regarding actress Samantha’s divorce, one of the main ‘reasons’ discussed in several social media posts, videos and news articles behind her break-up was the actress’ ‘reluctance’ not to have children.

Becoming mothers and motherhood is considered such a natural extension of a woman’s life that our society and people find it difficult to accept anything otherwise.

At the same time, millions of women continue to become mothers. Some happily as a matter of choice, others as a conventional progression to marriage. Several easily, while others struggle to get pregnant and give birth. Some plan when to become a mother while others are forced to become including those who have been raped both outside and within their homes.

Both man and woman embark on the journey of parenthood and the couple is supposed to be equally responsible for this experience and the process. However, it’s the woman who traverses most of it, from pregnancy and child birth to child rearing. Sometimes willingly and at times unwillingly bowing to the conventional pressures and social norms. And certainly at the cost of foregoing their careers, aspirations and individual freedom.

And yet, it’s women who are always questioned and judged on their decision, situation to have or not to have children, the number of children, their inability to have children. And even to stay unmarried or single. Women are time and again reminded not to miss the biological age for having a child and to ‘settle down’. And if they fail to conceive or choose not to become a mother, the stigma, barbed comments and unsolicited advice from family and acquaintances multiplies.

Women in India hardly have the freedom or the choice to decide to have a baby or not even though it’s their body and life in question. A large section of women in India do not even have the rights over their bodies. Many of them go through multiple pregnancies – including those at very young age – with a desire to have a male child or more children, with little access to safe family planning methods.

And once the children are born, the onus of their nurturing largely falls on the mothers. Along with this, countless mothers do not even have the choice of not working or to take a break to enjoy motherhood. They are constantly conflicted having to negotiate work with child rearing and are often made to feel guilty about it. They are even blamed for not breast feeding their babies!

Importantly, in India there are hardly any facilities, rights or support for mothers in both government and non-government set-ups. It was only a few years ago that the paid maternity leave was extended to six months which again seems inadequate and not offered by many organisations. Full maternity leaves, flexible timings, and work structures, creche services are among the basic facilities which we severely lack in work spaces even today. Women working in the informal sector have it worse with little access to such services and their inability to afford it either. So, it’s ironic the way our so-called leaders want more and more women to work, be productive and also reproductive!

Young married couples, especially the wives, are often bombarded with questions and remarks – Any good news? That girl who got married right after you is pregnant…We are longing to see a grandchild! – from families and acquaintances. Every time someone’s pregnancy or delivery is spoken about, the needle automatically points towards the wife. But the husband is never asked the same questions as the wife. And in most cases of delayed pregnancies, until the man is tested, it is assumed that the problem lies with the woman. Even then, men are never shamed or disgraced with the label of being ‘barren’ as childless women are described.

Women undergo immense stress and pressure to become mothers which is again followed by another set of questions and pontification on how to raise the baby. They continue to be labelled selfish for seeking professional and personal fulfilment while being a mother.

Parenthood, especially motherhood, is so much venerated and valued in Indian society that couples and their families are driven to any extent to have a child and also to prove their virility publicly. The desire to have one’s own child overrides everything else despite the high costs and risks involved.

A case in point is that of 74-year-old Mangayamma Yaramati, a native of Andhra Pradesh who resorted to IVF treatment to give birth to twin girls a few years ago. The father, Sitarama Rajarao, was 82 during the birth of the children. The couple had been trying to become parents for over five decades and Mangayamma was determined to be a mother after facing continuous criticism and stigma.

However, breaking the conventions some couples are now willingly making the bold decision to live a child-free life. Women are now coming forward to freeze their eggs to have children at a later stage of their lives. Of course, those who cannot or have chosen not to become parents now or never are made to feel like failures or accused of being selfish and self-indulgent.

Breaking further social constructs, a few Indian women are also choosing not to have children due to personal, social and economic reasons. Unlike the popular and conventional notions, these women do not consider motherhood to be the most fulfilling aspect of a woman’s life and find meaning and purpose in life through other ways.

In a country where motherhood is revered and glorified, this decision isn’t always an easy one. Many childless women say they have to deal with immense social pressure and are also discriminated against. Like women, many men do not want to have children but they are never questioned about it or judged on their decision.

Feminist writer and publisher Urvashi Butalia in her essay in “Of Mothers and Others – a volume that offers alternative views to the conventional images of motherhood – shares her experience as a single Indian woman who opted out of motherhood. She also makes a strong case for a woman’s right to remain childless and that that being a mother is not the only role women can play in society, which resonates with a growing number of women now.

Bearing children and motherhood is a multifaceted and intricate experience and there is certainly no right and wrong about it. Moreover, motherhood can be experienced not only in terms of giving birth but by adopting and through surrogacy as well. Importantly, there is nothing amoral, abnormal, and amiss about women not wanting to have or raise children. A woman is a Person first. A Mother, she may or may not want to be.