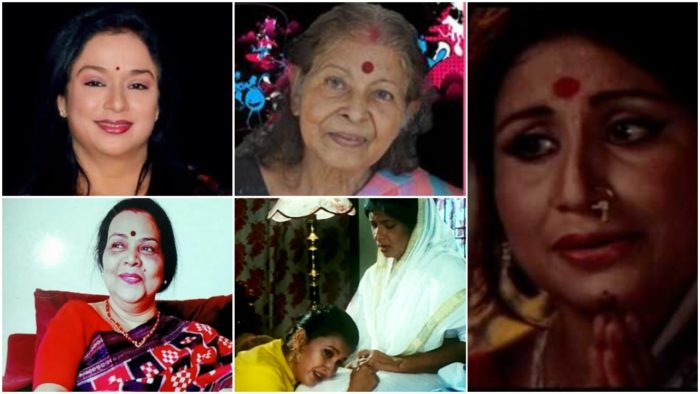 In Odia cinema industry, the character of mother has been sacrosanct. It’s portrayal of the typical Odia mother that often took the cake. On Mother’s Day, it is an opportunity to reflect upon such screen idols, who left an impressionable mark on Ollywood. Here are some actresses who made legendary their roles as Maa.

The artist in her took no time to shed the ‘Lal Pan Biwi’ image and don that of ‘Bou’ with aplomb in 1998. Mahasweta ruled the Odia film industry for nearly four decades, essaying varied roles – a daughter-in-law, a messiah for the poor, a political leader and a village girl, and she was also the highest paid actor then.

Women power, which she had become synonymous with, came to the fore even when she played mother in her later films like, ‘Bou’, ‘Tu Thile Mo Dara Kahaku’, ‘Jaga Hatare Pagha’ and ‘Chini’.

In 2017, the Jaydev Award winner and veteran actor had voiced discontent with the jury’s decision, adjudging her as the best supporting actress for ‘Dele Dhara Katha Sare’ for the 28th State Film Awards for the year 2016 while she felt her role in ‘Chini’ was much more deserving and better.

She immortalized the mother in ‘Ulka’ in 1981. The actor, who won accolades for her role Lalita in her debut movie ‘Jagannath’ was equally adorable as a mother and then hailed as the ‘sweetest grandmom’ of Ollywood.

After a 18-year sabbatical, she made a comeback with a bang with super hit movies like ‘Barsa My Darling’, ‘Prathama Prema’, ‘Shasughara Chalijibi’, ‘Premi Number One’, ‘Oh My Love’, ‘Mahanayaka’, ‘Neijare Megha Mate’. She was much appreciated for her role as a grandmother in the last named.

She was honoured with the State’s highest honour for contribution to Odia cinema – the Jayadev Puraskar in 1994 and Odisha Sangeet Natak Akademi Award in 1992. Cultural organisation Srjan awarded her Guru Kelucharan Mohapatra Award for the year of 2011 and Life Time Achievement Award from Cultural organisation Ghungur in 2012.]

Ollywood lost its ‘favourit mom’ Anita in 2018. She started her career with ‘Jajabara’. Anita played the lead in ‘Tapasya’, ‘Ram Balaram’, ‘Krushna Sudama’ and a comical role in ‘Nagaphasa’. She has acted in over 100 films and left an impression with her mesmerising smile and convincing portrayal of the role of mother.

The actor made her debut in Ollywood with the movie ‘Dharitri’ in 1973 at the age of 13 and has since essayed different roles, which include her impeccable comic timing in films like ‘AkhiTrutiya’ and ‘Sindura Bindu’ in the mid-70s. However, it her roles as a doting mother and grandmother that made her a household name.

Popularly known as Dolly Apa, she is the recipient of a state award for her performance in the film ‘Lakhmi Pratima’. She will be next seen in the upcoming ‘Nayaka Ra Na Devdas’.

Her personal favourite is the role of grandmother that she played in Babushan-starrer ‘To Akhi Re Mu’.