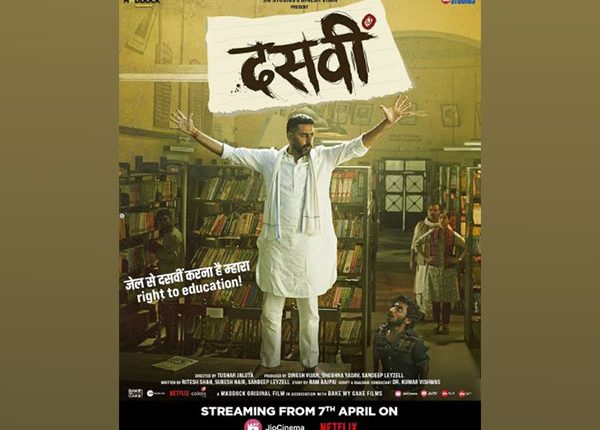 New Delhi: Abhishek Bachchan has won accolades for his role in the political satire, ‘Dasvi’ (Tenth) streaming on Netflix.

In the film, Abhishek plays the role of a politician who appears for his Class X exam and clears it in his 40s. Several inmates of Agra Central Jail, where the film was shot, got inspired by the film to appear for their exams. And now, the results of UP Board’s Class X  show that a dozen inmates have passed with flying colours.

The movie was screened for inmates in March on the jail premises itself. In April, inspired by the message, some of the inmates reportedly decided to appear for their Class X and XII exams. The results declared a few days ago show that nine of the prisoners passed the Class X exam, while three passed the Class XII exam.

Reacting to the news, Abhishek Bachchan called it ‘bigger than any award’ the film’s team could have hoped for. He said in a statement, “It feels wonderful when you see the positive effect a film you’ve been a part of make in real life. Credit has to go to the students and to my director, Tushar. His belief in the film and the story he wanted to tell. This news is bigger than any award or accolade we as a team could have received”

Speaking to India Today, Agra Central Jail Superintendant V K Singh said that these prisoners decided to study for the Class X examination after the screening of the movie in the jail.

Scripted by Suresh Nair, Ritesh Shah and Sandeep Leyzell from Ram Bajpai’s story – and directed by Tushar Jalota , Dasvi in an early scene shows Chaudhary’s disdain for lettered men when he ridicules his Principal Secretary, an Indian Administrative Service topper, Tandon. “What is the use of this education,” Chaudhary tells his cronies with an arrogance he wears on his sleeve. . “I have no such qualification, but Tandon is my slave, not the other way round…Build shopping malls, not schools…One will bring in money, the other unemployment.”