15 Timeless Hindi Cinema Classics You Must Watch On Streaming 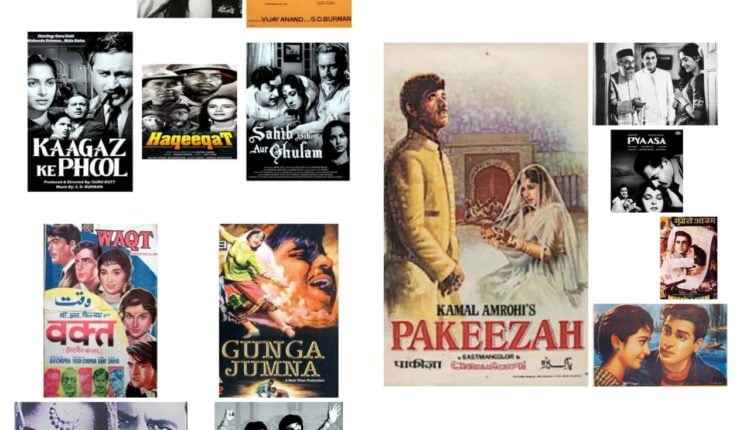 Classics of Hindi cinema have always transported us from the glamour and glitz of the B-Town to the rustic by-lanes of the village through nostalgic musings of sudden disillusionment. Most of the people have heard of these master directors — Guru Dutt, Bimal Roy, Raj Kapoor but never got time to watch their work. This is the time to watch these 15 classics that would port you from 1950s through 60s into early 70s and streaming over YouTube, Amazon, Mubi.

The film was directed by SS Vasan under the Gemini Production. The lead roles were essayed by Dilip Kumar, Raaj Kumar, Vyjayanthi Mala, Saroja Devi.
The movie is a story of 2 brothers (Raj Kumar and Dilip Kumar). While the elder brother Ram (Raj Kumar) is a worker in a mill, the younger brother Ratan (Dilip Kumar) is studying engineering in a different city and also works part-time as a rickshaw puller. As Dilip Kumar’s elder brother Ramu, the mill worker Raaj Kumar noticed Dilip Kumar’s ability to underplay and score. So whenever they faced each other, Raaj Kumar was simple, matching the thespian note by note with a low-key dialogue delivery. The result was magic on the silver screen.
Raaj Kumar and Dilip Kumar were next seen together on-screen after 32 years in Saudagar, 1991. 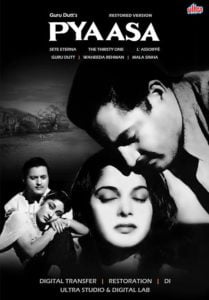 The story of a struggling poet and how his life changes when he crosses path with a prostitute who admires and understands his work when no one else seems to. Pyaasa is an iconic Guru Dutt film. The black-and-white masterpiece is still remembered for compelling performances and the haunting music, composed by SD Burman with lyrics by Sahir Ludhianvi. And to think that Dutt almost shelved it! Mala Sinha and Waheeda Rehman were also seen in the lead roles. 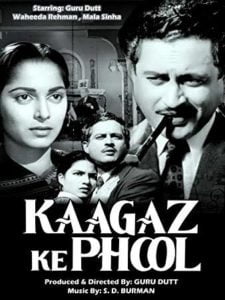 Guru Dutt, Waheeda Rehman, Mehmood, Mintoo Mumtaz, Kumar Naaz were seen in the lead roles. The behind-the-scenes film about film-making, Kaaghaz Ke Phool became a cult classic following the eerie semi-autobiographical death of its director Guru Dutt. The story revolves around a celebrated movie director, who feels uninspired by the tinsel-lined glitz of studio era Bollywood. When he discovers a new actress, innocent to the corruption of the industry, he believes he has found a muse to ease his restlessness. 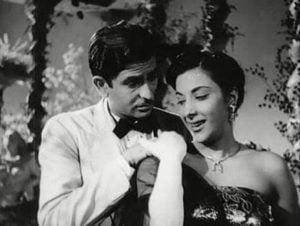 Prithviraj Kapoor, Raj Kapoor, Nargis, Sashi Kapoor, Leela Chitnis were seen in the lead roles. It is directed by Raj Kapoor.
A female lawyer is determined to prove her lover’s innocence in a murder attempt on the life of a respected judge. Echoing the dark lessons of the ancient Ramayana, Awaara shatters the nature versus nurture debate with a showman’s flair and surrealist fantasy, including the film’s legendary dream sequence evoking a descent into Hell. Awaara launched Raj Kapoor’s famous Chaplinesque hero for the first time, who resonated immensely across the Soviet Union and communist China as the voice of new generation. 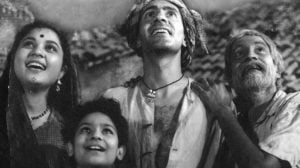 Directed by Bimal Roy, the story revolves around a farming family fighting to save their ancestral land from a cunning mill owner. Meena Kumari, Balraj Sahni, Nirupa Roy, Ratan Kumar, Jagdeep were seen in lead roles. Inspired by the work of Italian neorealism, Do Bigha Zameen pioneered early parallel cinema with a deliberate attention to the “everyday,” and the feeling of an invisible, unhurried camera whose shots and mise-en-scene are both carefully constructed and effortlessly fluid. The nationalist sentiments of the film made it the first Indian film to win the Prix Internationale at the 1954 Cannes Film Festival. 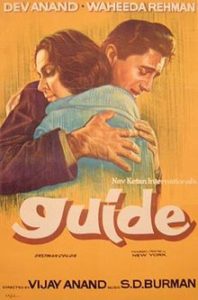 The film was directed by Vijay Anand and Tad Daneilwski under the Navketan Films. Dev Anand, Waheeda Rehman and Leela Chitnis were seen in the lead roles.
Based on the RK Narayan novel of the same name and bolstered by a stunning soundtrack, Guide explores a fundamental Vedic transformation from materialism to a release from worldly attachments in an extremely unlikely hero. The photography, art direction and production of the movie sets it apart from other movies of its era making it into the list of classics. 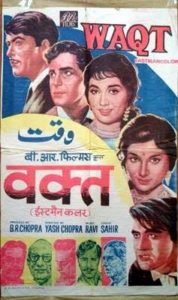 The multi-starrer film was directed by Yash Chopra and produced by BR Chopra. Stalwarts like Raaj Kumar, Sunil Dutt, Shashi Kapoor, Balraj Sahani, Sharmila Tagore, Sadhana Shivdasani and Madan Puri were seen in the lead roles. Led by Balraj Sahni as the patriarch, Waqt is a story of a family destroyed and displaced by an earthquake (some critics have interpreted the natural disaster as a metaphor for Partition. At times when solo starred films dominated the scene, this multi-starrer with several genres in it: thriller, drama, musical, romance was one of the biggest hits. Even after 55 years, the time doesn’t prevent Waqt to be a wonderful entertainer. 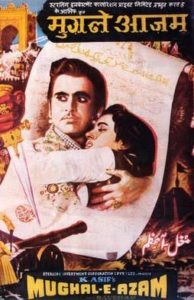 Known for its grandeur, Madhubala and Dilip Kumar’s spectacular performances, timeless songs, K Asif’s magnum opus is still a classic that people keep going back to. The film also went through its own share of troubles as about 25 percent of the footage shot before the partition had to be scraped down. But as history stands witness, the tragic love affair between Salim and Anarkali, as shown in the film, became an epitome for doomed love. 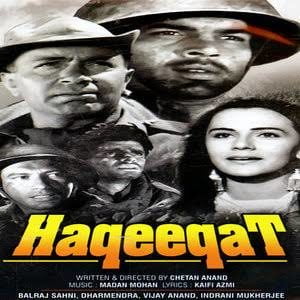 Indian Cinema hadn’t seen such authentic war scenes, coupled with the grandeur of the Ladakhi landscapes, until Haqeeqat happened. Starring stars such as Dharmendra, Balraj Sahni, Vijay Anand and Priya Rajvansh, the Chetan Anand film is set against the Sino-Indian war of 1962, a saga of pain underlined by Kaifi Azmi and Madan Mohan’s songs. 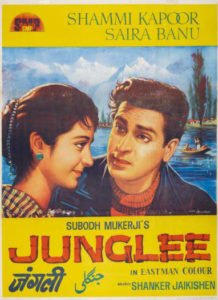 Shammi Kapoor, Saira Banu were seen in lead roles in the film. It was directed and produced by Shubodh Mukherjee.

In Junglee, Kapoor, perhaps Bollywood’s first dancing star, broke the shackles of his domineering mother to venture out to find love and freedom. 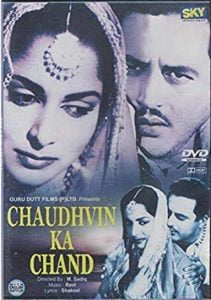 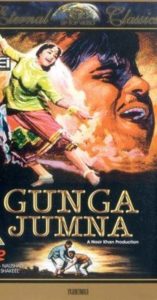 Starring Dilip Kumar, Vyjayanthi Mala, Nasir Khan and Kanhaiyalal in the lead roles, Nitin Bose’s Gunga Jumna is written and produced by Dilip Kumar. This film is a classic entertainer at its best with a powerful story, outstanding performances and riveting music. The story revolves around the struggles of Gunga (Dilip Kumar) as he fights a corrupt landlord (Anwar Hussain) and turns a desperado to avenge the honour of his mother.

Despite the economic struggle, he labours to bring up his younger brother Jumna (Nasir Khan) as a law abiding citizen but, in a strange coincidence, loses his life to the brother-turned-police officer’s bullet. The drama is punctuated with some stirring romantic interludes between Dilip Saab and ladylove Vyjayanthimala. 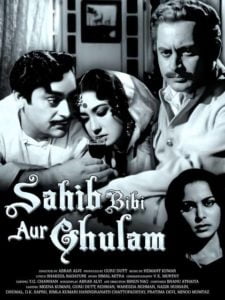 Directed by Guru Dutt and Abrar Alvi provides a nostalgic glimpse into the decaying Bengali feudal system unravelling a murder mystery at the heart of societal redemption. Meena Kumari, Waheeda Rehman and Guru Dutt were seen in lead roles.

Desperate to save her marriage, the younger daughter-in-law of a wealthy family sacrifices her moral boundaries to win over her alcoholic husband. Seen from the perspective of a young factory worker lured into a stately mansion as an ally of its young mistress, Sahib, Bibi, Aur Ghulam hauntingly opens the doors to the hollowness of exterior splendor. Meena Kumari’s portrayal of the tormented wife makes it one of the magnificent onscreen performances. 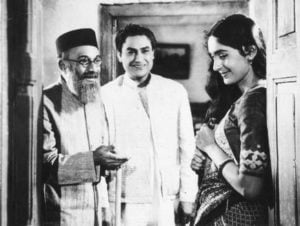 Had Bimal Roy been working today, he would have been described as a feminist filmmaker certainly. Bandini is hailed as Roy’s timeless classic which is a powerful ode to freedom, love, ideals and destiny. Ashok Kumar, Dharmendra and Nutan are seen in the lead roles. Kalyani (Nutan) is a C-class inmate serving a murder term. Against the backdrop of her haunting past, Roy interweaves a parallel story of a prison doctor (an idealistic Dharmendra) who falls in love with Kalyani. Nutan’s such simple and sublime performance can be seen as one of the most definitive female roles in the current era. 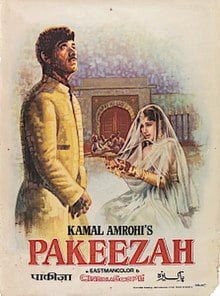 Depicting the grandeur of Muslim Lucknow at the turn of the century, Pakeezah is directed by Kamal Amrohi. Meena Kumari who plays the  titular ‘Pakeezah’ is a courtesan and dancer who dreams of leaving her life behind when a stranger falls in love with her in a train compartment, not knowing her true profession. Pakeezah‘s popular semi-classical songs illustrate the duality of a courtesan’s poetry, at once glamorising the elaborate rituals of love and destroying the institutions that upheld them.