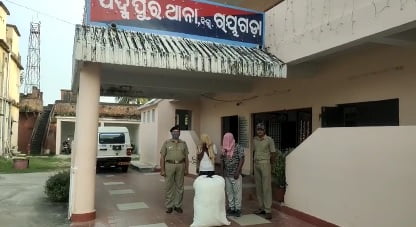 Rayagada: Police on Saturday arrested a home guard and another persons for their alleged involvement in ganja smuggling on Saturday.

Following a tip-off, Padmapur police conducted a raid on the house of the home guard Ramesh Sahu at Khambariguda village under Kenduguda police outpost in the district on the day. During the search, the raiding team seized 35 kg of ganja from Sahu’s house.

Acting on the information provided by Sahu, the police arrested his accomplice and ganga smuggler Jonesh Mali. Both of them were forwarded to court. The cost of the seized ganja was estimated to be over Rs 4 lakh.

The arrested persons have confessed that they were smuggling the contraband from Padmapur to Berhampur in Ganjam district, said IIC of Padmapur police station Biswaranjan Das.