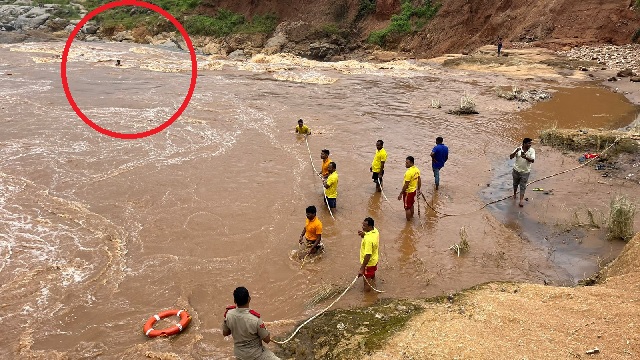 Rayagada: Four members of a family from Andhra Pradesh were swept away by the strong current of Nagavali river near Odisha’s Rayagada on Thursday.

According to sources, C Gopalkrishna jumped into the river on seeing his minor sons being carried away by the strong current. After rescuing two of his children, he got stuck in the river while trying to save his five-year-old son.

On being informed, fire personnel rushed to the spot and launched a rescue operation. Gopalkrishna was rescued after an hour of operation and rushed to district headquarters hospital for immediate medical treatment.

The search operation is still continuing to trace the missing minor.

“Four of six family members swept away in the strong flow of river. While two minors and Gopalkrishna have been rescued, another minor is still missing in the floodwaters. Our team is still searching for him,” said a fire personnel.