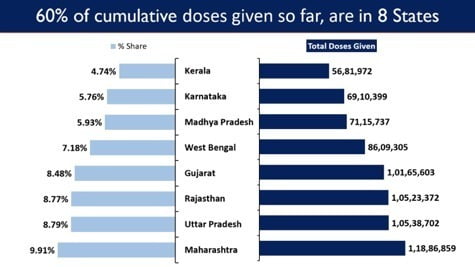 Bhubaneswar: The Odisha government had to stop the vaccination drive in three hotspot districts on Saturday due to the unavailability of doses.

Besides Koraput, Nuapada and Jharsuguda, the session sites in urban areas of Sundargarh, Sambalpur, Bargarh, Balangir, Kalahandi, Nabarangpur and Malkangiri, have been closed. These are among the districts worst hit by the second wave of COVID-19.

On Friday, 50 per cent of the session sites had run dry. Only 781 of 1,476 session sites were open for inoculation in 29 districts and it was a no vaccination day for Koraput district. Similarly, the inoculation drive was halted in 11 districts due to a shortage of vaccines on Tuesday.

While Odisha is struggling to maintain its vaccination target, which dropped to 91,195 on Friday from over two lakh a few days earlier, the data available with the Health Ministry suggest that 59.56 per cent of the total doses given so far are confined to eight states. The states are Kerala, Karnataka, Madhya Pradesh, West Bengal, Gujarat, Rajasthan, Uttar Pradesh and Maharashtra.

Odisha has been sending SOS to the centre for an adequate supply of vaccines since March 23 for an uninterrupted inoculation drive.
Chief Minister Naveen Patnaik and Health Minister Nab Kishore Das had also written to the Health Ministry for 25 lakh doses of vaccines on different occasions.
Raising questions on the “insufficient and erratic” supply of vaccines, the government had urged the Centre not to discriminate states while supplying the vaccines.
The shortage of doses also affected the four-day ‘Vaccination Festival’ to inoculate the maximum number of eligible beneficiaries, announced by Prime Minister Narendra Modi.
On Saturday, Naveen wrote to PM Modi, suggesting four measures to improve the process of vaccination across the country.

— Vaccines be made available outside the government supply chain in the open market so that citizens who can afford them can buy the shots on their own.

— Increase supply by clearing the use of vaccines that have already approved globally by credible agencies and governments.

— India had a huge vaccine manufacturing potential and the Centre and states should support units to ramp up vaccine production.

— Metropolitan cities witnessing a surge in new cases should be allowed priority vaccination and there should be flexibility in the age criteria in these regions as these are economic nerve scenes of the country.

With Andhra Pradesh along with Odisha flagging the issue of vaccine scarcity in recent times, Union Health Minister Harsh Vardhan on Saturday said that the Centre has supplied 14.15 crore doses to all states and UTs and around 12.57 crore of those have been consumed so far.

Allaying fears about vaccine shortage, he said another batch of 1.58 crore doses will be reaching the states in one week. “I am quoting these numbers so that there is no misconception about vaccine availability,” he added.

Fact Check: Will Those Without ID Cards, Like Beggars, Get…