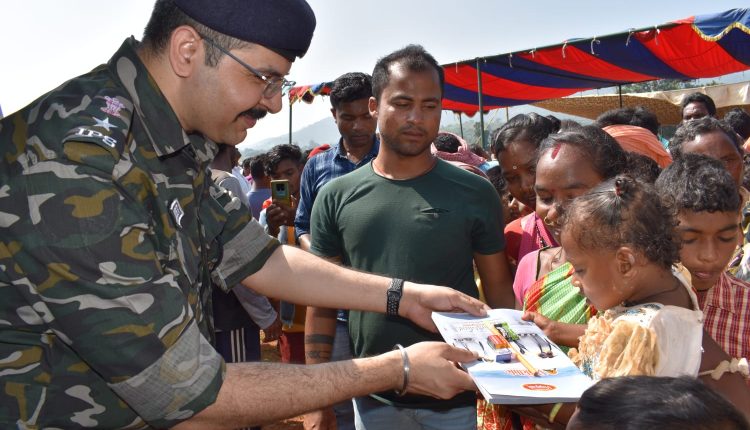 Bhubaneswar: More than 650 active Maoist supporters, including over 350 militias and village committee members, surrendered before the security forces in Odisha’s Malkangiri district.

According to sources, most of them are members of local village committees and Chetana Natya Mandali – a cultural outfit linked to the banned CPI (Maoist) – in Swabhiman Anchal of Malkangiri district, once a Red corridor that lay cut-off from mainland Odisha.

The surrendered Maoist supporters, who hail from remote villages of Odisha and Andhra Pradesh, used to assist the cadres of the banned outfit in carrying out attacks on security forces and civilians, besides other violent activities.

Raising slogans such as “Maobadi Murdabad, Ama Sarkar Jindabad”, the sympathisers burnt Maoist literature, effigies, and uniforms worn by cadres of the banned outfit before surrendering on Saturday.

The Swabhiman Anchal, comprising 182 villages, is experiencing a quick turnaround, with the initiation of several development projects in the region.

The construction of Gurupriya bridge, joining the region with mainland Odisha, has helped bring about developmental changes in these Malkangiri villages. People now have access to electricity, drinking water and other basic amenities, said a senior police official

Moreover, medical facilities and mobile network are also available in these villages, many locals have now taken to pisciculture to earn their livelihood.

It may be noted here that hundreds of Maoist supporters in Swabhiman Anchal had surrendered before the police earlier this year. A police official said many more are considering ‘ghar wapsi’ in the near future.

New Parents Ranbir & Alia Bursting With Love: ‘What A Magical Girl She Is,’ Reads Their Insta Post