83: A ‘Stroke-less’ Script That May Not Fetch Runs In Box Office 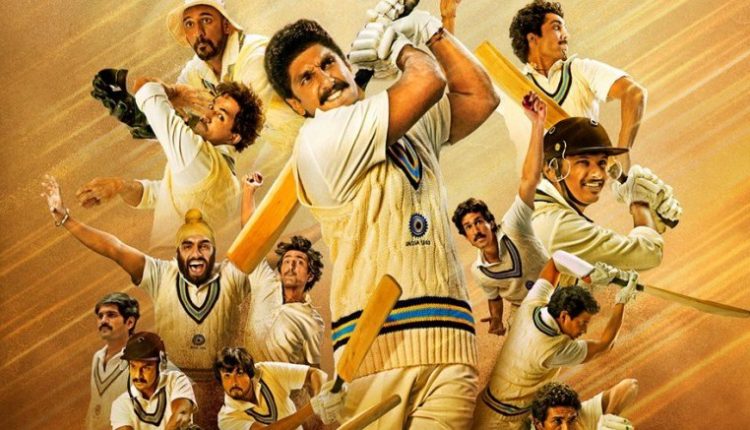 If revenge dining and revenge travelling are the new buzzwords, revenge entertaining cannot be far behind and when it comes to entertainment in India, Bollywood and cricket are the names that make the game. The effort to marry the two through movies is not new but the effects on the audience have always been different.

83 is another ambitious attempt to cash in on the two never-dying demand sources of entertainment. Like any other movie, a movie on sports can also be based on facts or fiction. Director Kabir Khan did the mistake of deciding to bat first on a green top wicket with windy conditions. A disaster from the word go. The biggest error in judgement of conditions is equivalent to an error in the conceptualization of a movie before it is ready for production. If he had done a little homework, he would have known that the chances of succeeding in a movie with a sports theme were more, if it is either a fact-based movie on an individual or a fiction based movie on an event. Kabir Khan did just the opposite. He chose the wrong combination of a fact-based movie on an event.

Obviously, it needed a lot of research work and interviews of every individual associated with the event finally leading up to the victory to help build a string misc-en-scene. It was clearly not done. The result is a stroke less script that cannot get many runs in the box office. Bringing politics and border warfare and creating the scenes were unnecessary deviations from the script crying for substance. The poor screenplay is sufficient to show the pathetic preparation done in collecting information and stories.

With a weak script, it was now left to the other technical teams to give their best. Unfortunately, it was miserable in all machinery of production. The Art director generally rises up to the challenge of movies based on historical periods. Sadly, nothing in the sets both outdoors and indoors gave the feeling of 83, other than the overused rotary dialer phone, rooftop tv antenna, the black and white TV sets and a heap of files on a table in the cricket board office in the opening scene. These are props used by nursery children in fancy competitions and celebrations.

With more than half of the movies covering actions on the field, the sports action director had more than a lot of roles to play. He did a fairly good job in the batting actions of Viv Richards and bowling actions of a few Indian bowlers, particularly Kapil Dev. It’s here that Ranveer Singh’s hard work has really come across in his acting and actions and brilliantly picking up Kapil’s English accent. But without a good script and dialogues, a good actor can only go so far and no further. Pankaj Tripathy was impeccable as usual but Deepika Padukone was a waste.
.
Since success was eluding Kabir Khan for a long time since ‘Bajrangi Bhaijaan’, he has desperately tried to add a few popular characters and replicate a few emotional scenes from his previous movie, for example, a large crowd swayed away by common emotions. The echoing voice of a child screaming and superseding the voice of the crowd, etc.

But clips and cuts pasted on a new work make it look patchy and not perfect.

One of the most-awaited movie releases on the big screen during the pandemic has left the audience, particularly the cricket lovers, definitely disappointed.

Woman With Omicron Dies In Odisha; Cause Yet To Be Confirmed