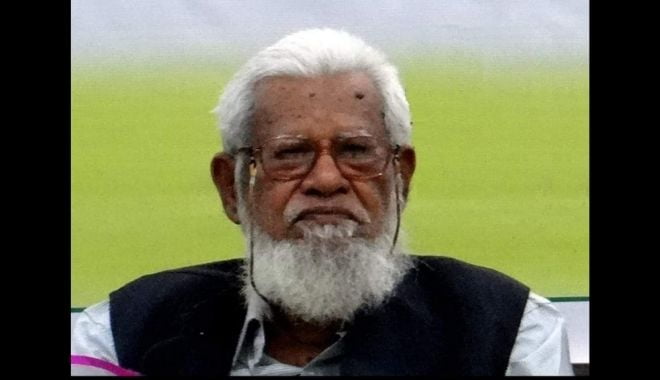 Professor Md. Fakhruddin (1934-2021), served with great distinction in different government colleges of Odisha including Ravenshaw College, M P C College, F M College, Khallikote College and P N College. I can say, looking back, that he spent his best years at the then Gangadhar Meher College (now Gangadhar Meher University), from 1975 to 1981. He also served as Principal of Rajendra College, Balangir (1982-88) and retired in 1992 from the State Selection Board. He was also associated with the OGCTA (Odisha Government College Teachers Association), where he was President from 1988 to 1992. He fought diligently for the rights of teachers.

He touched the lives of thousands of students and teachers in different ways. In his passing we have lost a man whose kindness and courage far exceeded the official briefs he carried.

A generation of teachers risked everything they had to bring a college back on track. Led by Prof K S R Murthy, an eminent scholar of Physics, the college needed a few feisty teachers to balance teaching, discipline, administration and impact. This is where Prof Fakhruddin came in and showed his skill and scale to match.

Prof Fakhruddin put the interests of the college before his own worries and interests. In fact, years later we heard one of his colleagues gratefully recalling his historic if dangerous encounter at the college gate with rowdy examinees who wanted to disrupt the entire examination process. One kick from him settled the matter, it seems. The other important aspect of his life as a teacher was his punctuality. Others may have used the sentence elsewhere but I have personally seen him say to students coming late to his class: “Sorry, you are too early for the next class.” We wondered what he would say to girl students in such a situation. We found out that he made no exception for anybody.

He was a no-nonsense teacher with a human face. During his days at Sambalpur he was clearly one of the more visible faces of the faculty at Gangadhar Meher College. Those days one’s reputation as a teacher depended on how one fared in the general classes — a virtual minefield with close to 130 students in halls bigger than regular theatres — and how seriously one was treated by particularly students of commerce, an unpredictable and demanding group that paid no heed to the past reputation of teachers. In short, these classes demanded, more than anything else, a presence that combined situational awareness with a very high degree of professional competence. He did exceedingly well in both. The examples he chose in the classroom did not come only from the textbooks. He drew boldly and liberally from politics, films and everyday life, much to the astonishment and approval of the unwilling.

A deeply religious man, he was absolutely secular in his professional life. I remember him arriving first for all our functions, including Ganesh Puja, Saraswati Puja, Independence Day and Republic Day celebrations. He was always the last to leave these gatherings. I now appreciate what he taught by example.

As the senior-most teacher of the department — after Prof Srimat Sahu, who was Vice-Principal of the college, and Prof Manish Chakraborty, head of the department — Prof Fakhruddin was responsible for keeping track of all the English classes covering multiple faculties. This by itself was a humongous task. However, we never heard of anybody missing a single class, whatever the reason.

I have an incident in mind that will show what was at stake. Prof K S R Murthy, our Principal, once walked into and found our class without a teacher, looking sheepishly at our books and one another. He was very strict about classes and ensured that no class was cancelled. He got to know from us that the teacher who was supposed to take our class had met with an accident in front of the college and was taken by Prof Fakhruddin to a hospital nearby for treatment.

He looked thoughtful for a moment. Then he smiled and said: “In that case, you better wait. Prof Fakhruddin will be back.” No sooner had he finished the sentence than we saw our teacher, most of his face bandaged except for a narrow slit to allow him to speak, walk in with Prof Fakhruddin. Our class was not cancelled. Even the bandage became a non-event after sometime.

We wondered then who the hero of the morning was. I had no doubt that it was Prof Fakhruddin. He took his colleague to hospital and brought him back to the class. I am saddened to learn that this extremely committed teacher was blamed for not taking his classes in his sunset years. That is unthinkable, knowing as we knew our teacher. He was unfailingly just and fair in his treatment of people. Maybe his autobiography, which he wrote a few years  before his passing, and, which I am yet to read, will put things in perspective for us.

He was also a stylish teacher. He transformed the lives and English speaking styles of many, not just students. Much like Prof Srimat Sahu, Prof Fakhruddin insisted on short and correct sentences. However, unlike anybody else in the department faculty, he insisted on correct pronunciation of English words. He trained at what was then called CIEFL (The Central Institute of English and Foreign Languages, now The English and Foreign Languages University), Hyderabad, as many of his colleagues and contemporaries did. We heard that at Hyderabad, his pronunciation was recorded and used for illustration by the legendary pair of R K Bansal and J B Harrison, experts in phonetics, who put together the first book of English pronunciation for Indian students.

I gratefully recall my teacher with fondness and respect, knowing I would never be able to repay his many debts. May his soul find peace and rest!

Professor and Head of the Department of English at Tezpur University, Assam