An Ode To Ram In Simpler Times 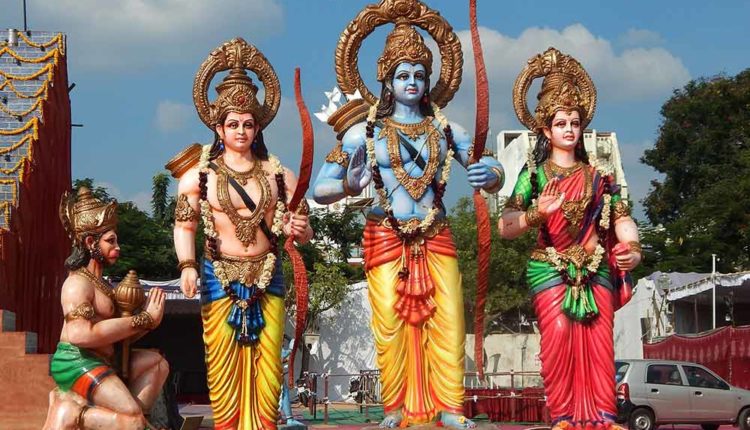 Childhood memories are often linked with distinct sounds, the feel of the air or the taste of food once cherished. Ram Navami Mela of my old locality, Nivaranpur, in Ranchi, is something that comes back to the mind to borrow from Wordsworth’s, ‘in vacant or in pensive mood’ or at times triggered by a Facebook post of a friend with a shared past.

My family was never religious, so the usual rituals of Ram Navami, were not part of our calendar, yet like all children and grown-ups when the late spring air in our courtyard, the rustling of leaves and sparrows hopping around, brought a feeling of joy, of expectation that Ram Navami was near. The fair was held in a large open field near an old temple, called Tapovan Mandir, by a stream, a trickle of the majestic Subarnarekha (literally a golden line).

An elderly sadhu with flowing hair and beard kept watch, seated near a huge nagara or drum and we children loved to strike on the thick hide worn with time. I don’t remember the gentle old man ever getting angry or rebuking us as we ran around the cemented courtyard playing hide and seek.

The courtyard also had rectangular mosaic patterned cement divans and bolsters on which we would climb and then jump down.

The day of the Mela would be announced by hawkers blowing on their ‘bhonpus’, shaking their rattles, and carrying all manner of handmade toys with children trailing them, some with a few rupees to buy, others just to admire wide-eyed and envy their friends-quite a long procession it used to be, winding its way through the neighbourhood alleys, till it reached its final destination.

That was the time when children got their first glimpse of the Mela – the curtain-raiser of sorts, with vendors, toy-sellers, sweet-meat sellers trickling in, spreading their wares on striped cloth dhurries that were called ‘Shatranjis’.

There were rarely any stalls back in the 1980s, when we were Mela regulars. Most spread their colourful plastic, wooden toys, and the star attraction — black folded-paper crocodiles that would squiggle after the owner when the string was pulled. It had a small piece of wood for balance. Pink and white striped ‘bhonpus’ or flutes made of palm leaves that made a unique sound – loud and deep but not jarring – was the other annual buy. This was like the theme music of the fair for everyone. The ‘bhonpu’ seller with his stand like a tall bouquet was a fixture one could not ignore, a shrine in itself.

I cannot recall the faces of the people who made this unique experience come alive year after year, yet it is an event that will stay on in my mind’s eye. In the afternoon, one would see neighbours setting up water and sherbet kiosks that served the visitors and the ‘Jhandawalas’ in the evening. At times, we lent a hand or helped with organising first aid kits. It was a holiday for all, so Ram Navami meant all six members of our joint family were home.

Chores were wrapped up early, the kitchen cleaned by late afternoon so that everyone was free for the trip to the Mela. By evening, it was time for the mandatory 6 to 7-hour long power cut to pre-empt any electrocution or short circuit fires once the procession of flags would start.

Most people would visit the Mela while there was still daylight, as there were no lights or generator sets lighting up the fair. Phuchkas, ‘dahi badas’, ice cream or ‘kulfi’ served or sprouts with a dash of lime and rock-salt on ‘sal’ leaves were some of the treats, apart from the traditional savoury of Jharkhand ‘dhuska’ (fried lentil batter with a sharp green chilli chutney). There were the usual balloons to be bought for the children and the women struggled to keep a tight grip over them while they bargained for what caught their fancy — bangles, earrings or pots, pans or ladles, some made of handcrafted wood.

By evening, the procession of flags would start. Teams of men would horizontally carry huge colourful flags – saffron, red, and yellow – the young running, the old ambling along. They were made of shiny satin with embroidered borders bearing the image of Lord Hanuman or Bajrangbali that would be unfurled at the fair. We children would often wonder where they came from and where they vanished after the fair.

At times, there were displays of martial arts. This was the time when the celebratory air reached a crescendo, and the ground would be packed with flag bearers and people, as the sun slowly set.

Apart from the loud music of a local band or drums or children blowing their ‘bhonpus’ that tasted bitter, and the cacophony of hawkers trying to outshout each other, hardly any other voice could be heard.

The late evening air was still nippy and Petromax lamps gleamed in a few stalls bathing the fair in their dull moonlight glow.

The sight of hundreds of sequinned flags fluttering, the conviviality of a fair that is still fresh in the minds of many who shared a childhood, a neighbourhood or a city, is what makes one nostalgic and chimes with social media posts of friends – an ode to simpler, gentler times.