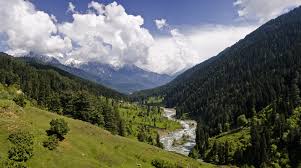 New Delhi: People from outside Jammu and Kashmir can now buy land in the union territory by amending several laws, ruled the Centre over a year after the nullification of Articles 370 and 35A of the Constitution, Zee News reported.

In a gazette notification, the Centre has omitted the phrase “permanent resident of the state” from Section 17 of the Jammu and Kashmir Development Act that deals with disposal of the land in the union territory, the report added.

Before the repeal of Article 370 and Article 35-A in August last year, non-residents could not buy any immovable property in Jammu and Kashmir.

“I want to say this forcefully and with full responsibility that agricultural land has been kept reserved for farmers; no outsider will come on those lands. The industrial areas that we have defined, we want that like rest of the country, here too industries come so that Jammu & Kashmir also develops and employment is generated,” the L-G said.

MHA officials also told News18 that a domicile certificate will not be needed to buy land in Jammu and Kashmir. “Non-agricultural land in municipal areas of Jammu and Kashmir can now be bought by anyone. There is no domicile requirement after this notification,” a government official told the channel.

Here are some reactions:

Former Advocate General Mohammad Ishaq Qadri: The amendments have opened floodgates for people from outside Jammu and Kashmir to buy lands. “Now there is no legal bar on purchase of land here by outsiders,” he said.

Former Jammu and Kashmir chief minister Mehbooba Mufti: After failing on all fronts to provide roti & rozgar to people, BJP is creating such laws to whet the appetite of a gullible electorate. Such brazen measures reinforces the need of people of all three provinces of J&K to fight unitedly.

National Conference leader Omar Abdullah: Unacceptable amendments to the land ownership laws of J&K. Even the tokenism of domicile has been done away with when purchasing non-agricultural land & transfer of agricultural land has been made easier. J&K is now up for sale & the poorer small landholding owners will suffer.

Active Cases Drop Below 15K In Odisha With 2010 New Recoveries