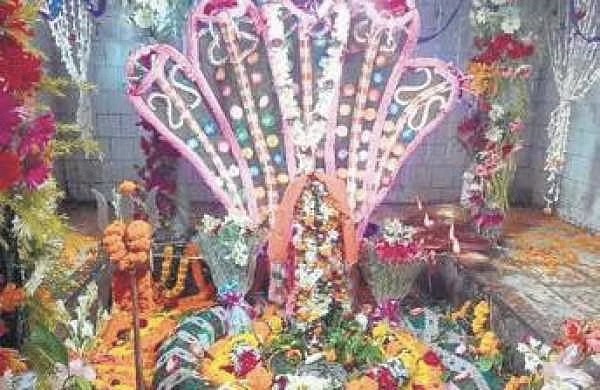 Cuttack: ‘Bada Osha’ was celebrated at Dhabaleswar Temple in Odisha’s Cuttack district on Sunday without participation of the devotees due to restrictions of the district administration.

The Bada Osha, one of major festivals at the temple, is attended by thousands of devotees every year. But the administration restricted the visit of devotees by crossing the suspension bridge over Mahanadi to the temple. It imposed prohibitory order under Section 144 of CrPC at the bridge.

The prohibitory order was clamped following inspection by a technical team which found cracks in some parts of the bridge. As the team recommended that it was unsafe for thousands of people to use the bridge during Bada Osha, the administration announced celebration of the festival without devotees’ participation.

However, the devotees could witness the celebration and Bada Singhara Besha of Lord Shiva on virtual mode. As per the schedule, the main door of the temple was opened in the wee hours of Sunday and the deity, Baba Dhabaleswar, was decorated with flowers and ornaments. It was followed by the Mangala Arti and other rituals.

The ‘Gaja Bhoga’, which is main prasad of the holy day, will be offered to the deity at midnight and distributed among devotees on Monday morning.