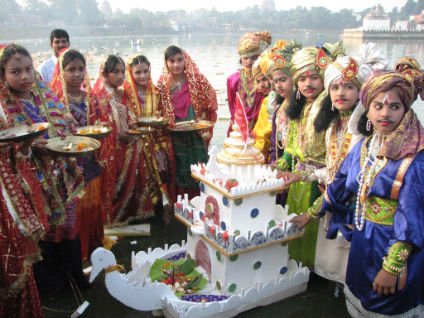 Bhubaneswar: With the beginning of the annual Bali Jatra in Cuttack just two days away, Odisha Bytes goes back to the archives of Ollywood to bring you three songs that celebrated the ritual of Boita Bandana. The ritual commemorates the sailing of ancient merchants from Odisha to foreign shores like Bali, Java and Sumatra on business trips in the month of Kartik.

In this film directed by Biswanath Nayak, the song ‘Aji Kartika Punei Dina Re Majhi Kata Mari, Ojhala Udei Jaa Re’ invokes the glory of the erstwhile kingdom of Kalinga’s maritime heritage. The song refers to the business trips by merchants to Java and Sumatra and trading in crops and minerals. The lyrics by Satya Narayan Parida also speak about the exchange of ideas between countries. Sandhya Mukherjee lent voice to the song, which was composed by Nachiketa Ghosh.

The song ‘Boita Bandana’ from the film Kanakalata (1975) describes the making of boita (boats) for overseas voyages. It asks the Bindhani Bhai (the artisan) to take wooden planks and use glue and nails to fix it as well as to take care of the sail and the mast. The song goes on to talk of the offerings, including sindoor (vermillion), made to Maa Mangala to seek her blessings for a safe voyage.

The products the merchants traded on also find mention in the song composed by Balakrushna Das with Bhikari Bala and Shikander Alam as singers.

It also includes the Boita Bandana ritual by the wives of the merchants. A lively song, it presents all emotions encompassing the ritual in right dose. The lyricist Kalicharan Patnaik has used the lingo of the people involved in boat-making in the lyrics.

The movie Tapoi (1978), which is based on folklore about two Sadhaba brothers, comes closest in depicting the life of the ancient merchants from Odisha.

The other notable thing of the film is the use of colloquial language, ‘ajhana, daria pir, bir karama’ picked from father of modern Odia literature Fakir Mohan Senapati’s autobiography ‘Atma Jeevan Charita’. These words have been extensively used in the Akhaya Mohanty composed songs, ‘Sata Daria Pare Re Boita Bhasi Jaa’ and ‘Bhinei Babu Bhinei Babu’.

The song ‘Sata Daria Pare Re Boita Bhasi Jaa’ shows the merchants starting the journey and their wives bidding them farewell by applying sindoor (vermilion) on their foreheads. The relationship that Tapoi shares with her seven brothers is also depicted in the song, which celebrates the pride of Odia merchants, storms they face during the journey and their faith in Maa Mangala to steer them to safety.

The other popular song on Bali Jatra, but not from any Odia movie, is ‘Na Jare Naja Gori Bali Jatara Dekhi’ by eminent singer Chitta Jena.