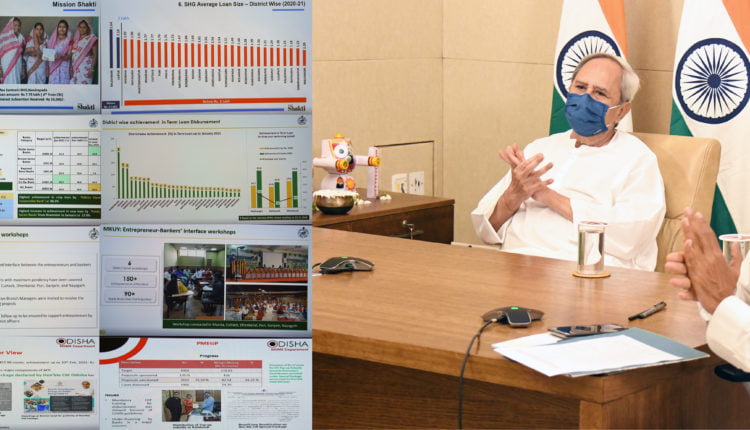 Bhubaneswar: Chief Minister Naveen Patnaik on Friday said the financial credit to the Mission Shakti groups and SHGs in the state has already crossed the annual target.

Appreciating the efforts of banks and districts for making coordinated efforts to improve lending to priority sectors during a review meeting of credit linkages with bankers, collectors and top officers of the government on virtual platform, the Chief Minister said there has been a considerable progress in credit disbursement to priority sector during the last 2 months.

He said from the last meeting in December, about Rs 1600 crore more has gone to Mission Shakti groups which is about Rs 500 crore more than the annual target. Similarly, against the annual credit target of Rs 3240 crore, the SHGs have received over Rs 3745 crore by January.

Stating that the average loan size in SHG sector is Rs 1.49 lakh which needs to be improved to at least Rs 2 lakh, Naveen cautioned over the need to focus on increasing the average size of loan. He congratulated Ganjam, Balasore, Nuapada, Kandhamal and Angul districts for good performance.

Coming to MSMEs, the chief minister said they are the backbone of the economy and play a significant role in employment. The sector is expected to achieve the target of Rs 20,457 crore by March.

He also appreciated that the State Bank of India has given the maximum credit support to MSMEs to the tune of Rs 7,541 crore so far.

Chief Secretary Suresh Chandra Mohapatra and officers of departments concerned participated in the meeting which was moderated by secretary to chief minister VK Pandian.