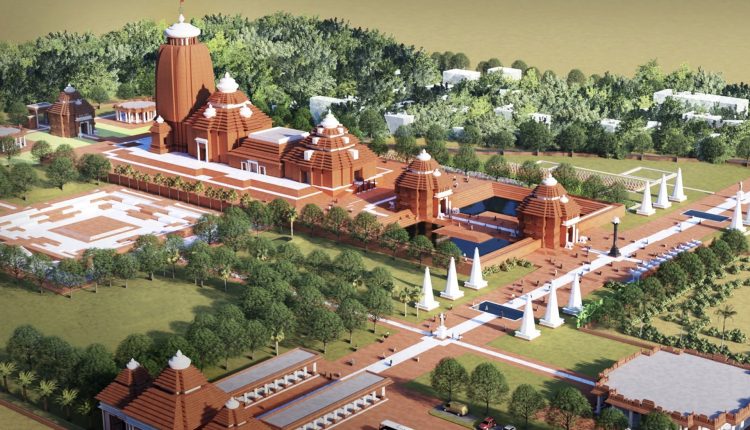 Bhubaneswar: Odisha and West Bengal have been at loggerheads over their shared culture and tradition. While the Rasagola battle is yet to come to a ‘sweet’ conclusion, the upcoming replica of Puri Jagannath Temple near the beach at Digha may ruffle a few feathers.

People from the neighbouring state throng Puri in large numbers every year to pay obeisance at Jagannath Temple and laze around on the beautiful beaches of the pilgrim town. However, Chief Minister Mamata Banerjee dreamt of having her own resembling the 12th-century Puri shrine in the state and this is being realised on a 20-acre plot in Purba Medinipur district by West Bengal Housing Infrastructure Development Corporation (WBHIDCO)

“We are hopeful about completing the project by the end of next year. Around 200 labourers are working round the clock. The 65-metre-high temple will be of red sandstone, which is being brought from Rajasthan,” WBHIDCO chief engineer Suman Neogi was quoted as saying by PTI.

The construction for the temple started in May this year at an estimated cost Rs 100 crore, he said.

“We don’t know from where the sandstones of the Puri temple were brought, but we are doing everything possible to have the same architectural flavour,” he added.

In 2019, Mamata said that her temple is part of an ambitious tourism project and hence will be built by the government. “The temple should be of the same height as the one in Puri. Unlike the Puri temple we have more open space. So, we will have a gateway and green zone,” she told reporters.

While many saw it as a move to woo Hindu voters, professor Indraneel Dasgupta of the Indian Statistical Institute, an alumnus of the University of California, wrote on social media: “Now Mamata Banerjee wants to set up a Jagannath Temple in Digha to rival the one in Puri. Seriously? This is every bit as heretical a proposal as building another Notre Dame Cathedral bang in the middle of Las Vegas. Is nothing sacred any more?”

Skygazers, Look Up! Jupiter Will Be Closest To Earth In Six Decades Tonight; Check How To Watch