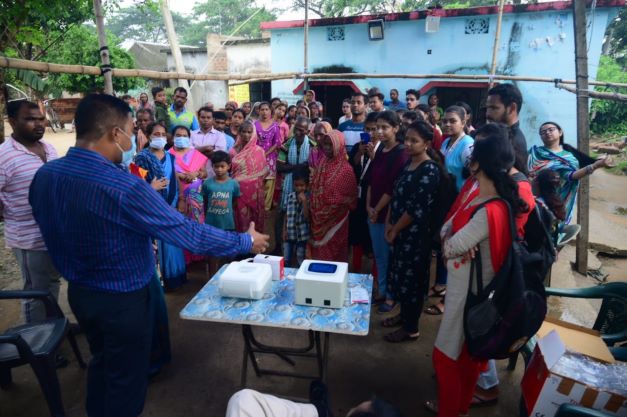 Bhubaneswar: AIPH University, Bhubaneswar organized a series of programmes to spread awareness about dengue, a vector-borne disease spread by Aedes mosquito, which may prove fatal if not detected and treated at an early stage.

A special workshop for students and faculty was held at the University campus where Dr B N Nagpal, scientist at WHO (SEARO), delivered a talk on ‘Bioecology of Dengue Vector Aedes and Implications on its Control’.

Elaborated on the symptoms and prevention of the disease, Dr Nagpal made the point that no vaccine has so far been developed to prevent dengue, neither is there any drug to treat the disease.

“Therefore the solution lies in identifying the breeding places of the (Aedes) mosquito and destroying those, while keeping away from mosquito bites. Unless necessary preventive measures are taken, dengue may become a major public health concern,” Dr Nagpal cautioned.

There was a live demonstration on sample testing of dengue-infected blood at the workshop. The students of AIPH University got hands-on experience of testing blood samples of dengue-infected patients using advanced TruNat machine, which was facilitated by Molbio Diagnostics.

To mark ‘Dengue Awareness Month’, which is observed worldwide in July, a ‘Dengue Awareness Vehicle’ was flagged off. It started from the University campus, toured several villages and adjoining areas spreading public awareness about the disease.

AIPH University students, along with Dr Nagpal, carried out a community awareness programme on dengue at Bilipada village, under Balianta block, near Bhubaneswar.