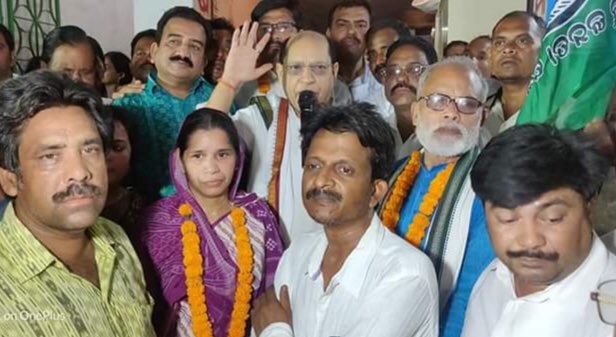 Bhubaneswar: The results of Bijepur by-election are out and what a win for the ruling BJD!

While many had predicted an easy win for BJD’s Rita Sahu from the assembly constituency in Bargarh district, the victory margin is now the talk of the town with her surpassing that of Chief Minister and BJD president Naveen Patnaik’s in May. She won the bypoll by a margin of 97,990, while the CM had blown the victory bugle with 57,122 votes more than his rival.

It was for the third time in 20 months that Bijepur went to polls and BJD came out triumphant are three times in this once Congress bastion in western Odisha.

The untimely death of the sitting Congress MLA Subala Sahu in August 2017 had brought it to the brink of election. And BJD, which was just recovering from an unimpressive show in panchayat elections, roped in Sahu’s widow Rita to contest the seat as its nominee.

Sahu had successfully represented the seat from 2004 till his death in 2017.

A naive in electoral politics, Rita won the byelection in February 2018 riding high on the sympathy wave. She trounced her nearest rival of Ashok Panigrahi by over 40,000 votes. Rita polled 1,02,871 votes and Panigrahi managed 60,939 votes while Congress candidate Pranay Sahu finished a poor third with only 10,274 votes.

A year later, Bijepur became a prestige issue for the BJD. The reason: Naveen contested from the seat during April-May Assembly elections along with Hinjili and won both seats by a sound margin.

In the election, Naveen defeated the BJP’s Sanat Gartia by 57,122 votes. While BJD chief got 1,10,604 votes, Gartia polled 53,482 votes and Congress continued with its poor show with its candidate Ripunath Seth bagging only 14,344 votes.

But he later decided to vacate it and retain his home constituency Hinjili, which he had been winning since 2000.

Again a bypoll in Bijepur!

This time too, the party reposed faith in Rita, who got down to the electoral battle as a ‘representative’ of the party supremo. “The CM has himself taken the responsibility of Bijepur. I will be his representative,” Rita had told Odisha Bytes during an interaction at Barpali, one of the three blocks under the constituency.

The BJP renamed Sanat Gartia as its party candidate while the Congress replaced Ripunath Seth with Dilip Panda.

The ruling party had all its men in the constituency wooing voters. With the Congress conceding defeat even before the election and the BJP conspicuous by its absence in the campaign trial, the result was a foregone conclusion and all eyes were now on the victory margin.

Contrary to general perception that there will be a dip in the margin, Rita set an all-time record in the history of electoral politics in Odisha by winning the seat by an incredible margin of 97,994 votes. She also surpassed the previous record set by the BJP leader Biswabhusan Harichandan (94,555 votes) in the 2000 Assembly elections.