BIRGing – The Lure Of Reflected Glory 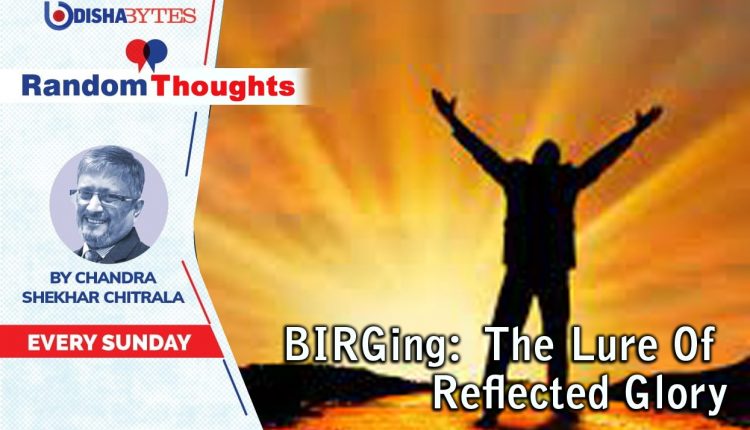 Long before Marvel came up with the idea of putting interesting snippets of the next movie in between the post-movie credits, there were many who would watch the scrolling list of those involved in making the movies (especially English), to spot Indian names. And in recent years, with a lot of post-production as well as animation being done from India, we got to spot plenty of our brethren there.

This is based upon the same reason why we get pleasure and feel proud when one of our citizens achieves success in any field globally. This is also the reason why we used to get autographs, and now click selfies from people we deem famous.

The ongoing Olympics have also brought forth this aspect of our behaviour. With every victory, we get to see a plethora of congratulatory posts on social media as well as on traditional media; and invariably, these posts also highlight linkages of the person/organisation making the post to the victors.

This phenomenon is not limited to individuals – it is now used by commercial as well as non-commercial organizations, governments and even departments within governments.

It is interesting to know that there is a term to describe this phenomenon – BIRGing or Basking in Reflected Glory.

Defined as a self-serving cognition whereby individuals associate themselves with known successful others such that the winner’s success becomes the individual’s own accomplishment, BIRGing does not require any contribution at all in the success achieved – just a plausible linkage is enough.

From the spontaneous celebration of fans celebrating the victory of the team they support to the boasts claiming a close relationship with a powerful person – all of these are examples of BIRGing.

While it used to be relatively less prevalent earlier and limited itself to autograph books and name dropping in social circles, today, with the widespread pervasiveness of social media and mobile phones with cameras, it has taken on gargantuan proportions.

We have become a selfie-obsessed generation and celebrities of every stature squirm with discomfort as they are forced to smile sportingly as perfect strangers lay their arms on their shoulders and act like old friends.

But why do otherwise perfectly normal folk feel the need to associate themselves with someone else’s success and try their best to find some sort of linkage with the successful person?

They do this because BIRGing increases self-esteem and stimulates self-glory. And wanting to feel good, to feel important, is a deep-rooted instinct that all of us have. This makes us feel more attractive to others, and so, even if it is subconscious, try to find linkages with the success that we see around us – however tenuous it may be.

While we usually make the linkage to the person/s after they are successful, when the linkage becomes more permanent in nature, for example with a sports team, any failure or defeat can bring about ugly reactions that can even turn violent. Visuals of rampaging football fans are an example of this, where the self-esteem of the fans takes a beating due to their team’s defeat, and they respond by brawling. Such examples, especially when it comes to cricket, abound in our country as well.

One of the foremost researchers in this field, Robert Beno Cialdini, currently the Regents’ Professor Emeritus of Psychology and Marketing at Arizona State University and formerly a visiting professor of marketing, business and psychology at Stanford University, as well as at the University of California at Santa Cruz, in his 1976 study called The Three (Football) Field Study showed how the win or loss of the college football team influenced students wearing the team T-Shirt.

In addition to the known changes in self-esteem and cognition, studies have also shown that physiological processes may be involved with BIRGing too, specifically, changes in the production of endocrine hormones. Tests conducted on fans watching a football game have shown the men’s testosterone levels increase while watching their team win, but decrease while watching their team lose.

From a marketing perspective, BIRGing is a very useful tool in promoting one’s products or services – and this is what we are seeing now when practically every company is bringing out large advertisements congratulating the winners.

This has even descended into illegality as brands seek to associate with players like P V Sindhu, without even seeking their permission, and apparently, she is considering filing charges against these companies for featuring her in their advertisements.

While BRIGing is an instinct that all of us have and it is not necessarily negative, when it is taken to an extreme, it can have a debilitating effect on us. With social media becoming such an important part of our lives, we see so many of us allowing their self-esteem and happiness linked to their apparent popularity and being seen as linked to successful people or events. Furthermore, this ability to easily bask in reflected glory could also lead to a decrease in efforts to actually earn glory for oneself. Hence it is very important for all of us to ensure while taking pleasure in others’ successes, we do not hinder our own well being and growth.