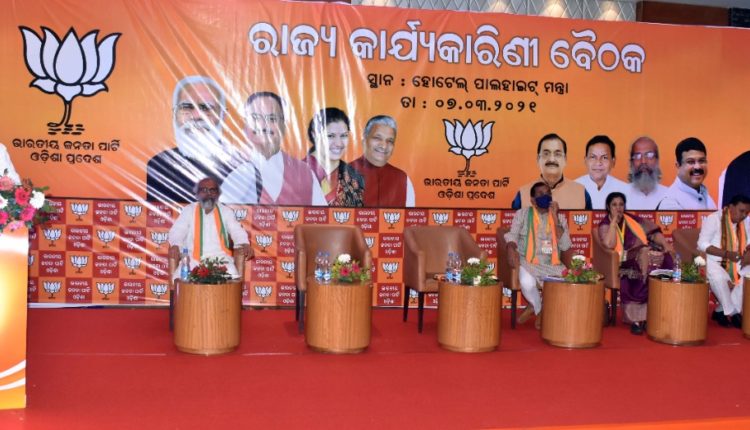 Bhubaneswar: The Odisha BJP in its state executive meeting on Sunday came up with  draft resolutions on the failure of the state government in maintaining law and order and implementing Central government funded development projects.

Talking to mediapersons after the meeting, state vice-president of the party Bhrugu Buxtipatra and general secretary Prithviraj Harichandan said the BJD leaders have taken control of 550 police stations in the state.

“The people of Odisha have lost faith in the police as they are not getting justice. On the other hand, the police at the behest of the ruling party leaders are implicating the leaders and workers of opposition parties in false cases,” they said.

Stating that the police have yet to reveal the progress of investigation into the murder of 16 BJP workers and leaders, they said there is no difference between the West Bengal Chief Minister Mamata Banerjee and her Odisha counterpart as there has been a spree of political violence and murder in both states.

Referring to the border disputes with neighbouring states, they said due to the failure of the intelligence wing of the Odisha Police, Andhra Pradesh, West Bengal and Chhattisgarh have occupied several villages of Odisha. Apart from this, the people of the border villages are now inclined towards the neighbouring states as the Odisha government has failed to undertake any developmental work in their areas.

Taking a jibe at the state government’s ‘Central apathy’ stand, the two leaders said though the Centre has sanctioned huge financial assistance for the inclusive development of Odisha, the BJD government has deliberately neglected the welfare works due to its vested political interest and self-propagation.

On the development of the heritage corridor in Puri and Bhubaneswar, they said as the state government is destroying the heritage monuments in the name of beautification, the BJP will vehemently oppose both the projects.

Reacting to the statement of the BJP leaders, BJD MLA Sashi Bhusan Behera said the saffron party has been struggling in Odisha for the last 21 years. However, he said everyone has the right to speech in the country.

Mamata Responds To PM: ‘There’s Only Modi-Shah Syndicate In India’