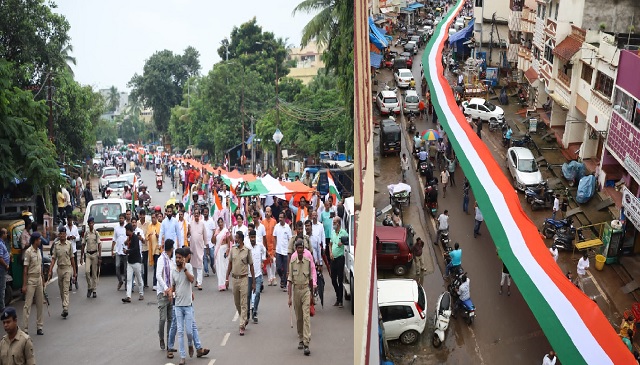 Bhubaneswar: With the country engrossed in celebrations of ‘Azadi Ka Amrit Mahotsav’, workers of Bharatiya Janata Party (BJP) took out one kilometer-long ‘Tiranga Yatra’, covering a distance of nearly 4 km, in Odisha capital on Friday.

The 1-km long Tiranga rally began from Badhei Banka Chhak near Lingaraj Temple and continued till Master Canteen Square. The rally was organized by Bhubaneswar Party Office under the leadership of Odisha BJP President Samir Mohanty.

“The tiranga yatra began on Kranti Diwas, August 9, to celebrate 75 years of the country’s independence. This is being conducted across the country at the call of Prime Minister Narendra Modi. We are spreading a message that every citizen should put up the national flag at their house,” said BJP President Samir Mohanty said.

A similar rally was seen in Bargarh on Tuesday. The 1 km-long flag was carried by hundreds of people in the town during the rally organised by the Vikash group. The Chairman of the group, D Murali Krishna, and several social organisations of the town participated in it.

‘Har Ghar Tiranga’ is a campaign under the shelter of Azadi Ka Amrit Mahotsav to encourage people to bring the Tiranga home and to hoist it to mark the 75th year of India’s independence.