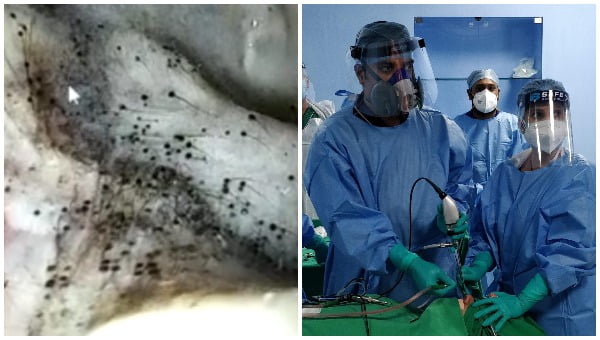 Bhubaneswar: Amid the COVID gloom, black fungus is gradually spreading its tentacles in Odisha with at least 73 patients afflicted by it in around a month.

“There have been six deaths while one patient has been cured of the rare fungal infection,” Additional Chief Secretary, Health, Pradipta Mohapatra told Odisha Bytes on Saturday.

He informed that 8 beds have been earmarked for black fungus-infected patients in each district headquarters hospital and 30 beds in all medical colleges in the state. “Separate beds have been created for COVID and non-COVID mucormycosis cases,” he added.

Of the six deaths, five were reported from AIIMS-Bhubaneswar. More than 50 per cent of the total cases reported in the state are undergoing treatment in the premier medical institute, informed medical superintendent Sachidananda Mohanty. “We had 41 cases till 10 am and another two to three were admitted later in the day,” he added.

“People are coming to AIIMS with the hope for better treatment. They also feel that we have the required Liposomal Amphotericin B for treatment,” he said.

The vials of this anti-fungal drug are provided by the Centre.

Four patients have so far been discharged from the hospital, he informed.

AIIMS-Bhubaneswar Dr Gitanjali Batmanabane said that Advanced Mycology Diagnostic and Research Centre at the hospital has helped in the rapid diagnosis of the suspected cases. “With people becoming careful about the use of steroids for treatment of COVID-19, the number will gradually taper off,” she added.

Head of ENT department Pradipta Kumar Parida said they had to remove the eyes of five patients through orbital exenteration due to irreversible damage and to check further spread of the fungus to the brain.

“The fungal infection first affects the nasal cavity, and then the eyes before spreading to the brain. In these cases, the patients had reported a loss of vision and forward protrusion of eyeballs. Such decisions are taken in consultation with the ophthalmology and radiology departments to bring down the fungal load,” he said.

Parida said it becomes difficult to save the organs when the infection is at an advanced stage. Virulence of the infection and level of immunity in a person also determines the spread of the fungus.

He said the fungal infection is removed here through endoscopic debridement and orbital decompression leaving no scar on the face.

“We continue endoscopic evaluation and cleaning of affected areas every day which prevents the recurrence and fastens the healing process. It also decreases the duration of hospital stay. All these procedures are done using a 4K camera, which identifies the black fungi-affected areas in a better way, than a normal camera which eventually improves the outcome. A cocktail of perfect surgery with medical management plays a key role in getting rid of the deadly disease,” he explained.

No deaths due to black fungus have been reported from the hospital. “The first black fungus case was admitted here. The patient was COVID positive and died of heart attack even before any medical intervention,” he clarified.

On June 10, doctors of MKCG Medical College and Hospital in Berhampur performed surgery on a 55-year-old man infected by mucormycosis to scrape off the fungus. While three persons infected with mucormycosis are undergoing treatment at the hospital, one has been referred to AIIMS-Bhubaneswar.