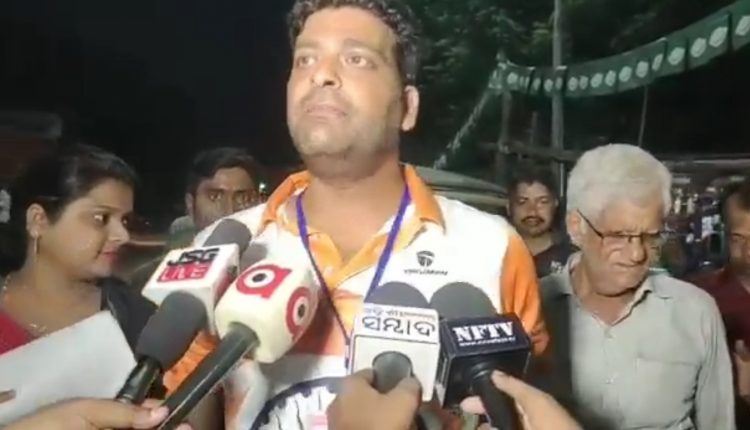 Jharsuguda: Even as the byelection to Brajrajnagar Assembly constituency is set to witness a high-voltage campaign with three major parties lining up Union leaders, ministers and film stars, an Independent candidate has launched a lone battle projecting his schoolteacher father as the star campaigner.

Suprit Behera, one of 7 Independent candidates in the fray, has been campaigning with the support of his relatives, friends and local people led by his father Brajamohan Behera. Coming from a middle class family, he lacks resources and funds to take on big players in the field. He has been campaigning by moving from door-to-door on foot without much fanfare seeking votes.

Suprit does not feel need for star campaigners, if one has courage and confidence to go to the people and seek their votes. “All major parties are fielding star campaigners as their candidates lack confidence to face the people and their problems. Why the chief minister is coming to campaign in a byelection in a small constituency? What is the need for roping in film stars? It reflects their nervousness,” said Suprit during a visit to a market in the town.

“My star campaigner is my father. While other candidates say it is the constituency of their husband and father, I say my father has taught children for 30 years in this place and made them successful and ideal citizens of the country,” said the MLA aspirant.

He is candid enough to admit that he is new to politics. “I know I am a greenhorn compared to other leaders who have vast experience in politics. But I have a major advantage of being a son of soil. I understand the problems and difficulties of the people because I have experienced those,” said the young leader.

On his future plans, Suprit said he felt suffocated and desperate by observing the political climate in the state. Stating that the bypoll was call of hour for him, he said he aimed at bringing a transformation in the system.

“I want a total transformation of the present political colour. I have started an initiative to change the corrupt politics and start a new age of clean politics in the state,” he said.

“Politics has become a business. Power leads to money and money leads to corruption. This vicious cycle has to be broken. Whether I win or not, I will have the satisfaction of making a beginning of cleansing the process. I follow the principles and ideals of my father,” said Suprit amid encouraging slogans of his supporters.

The byelection will be held on May 31 and the counting of votes has been scheduled on June 3.

Day Temp To Rise In Odisha From Today, Yellow Alert Issued For Thunderstorms