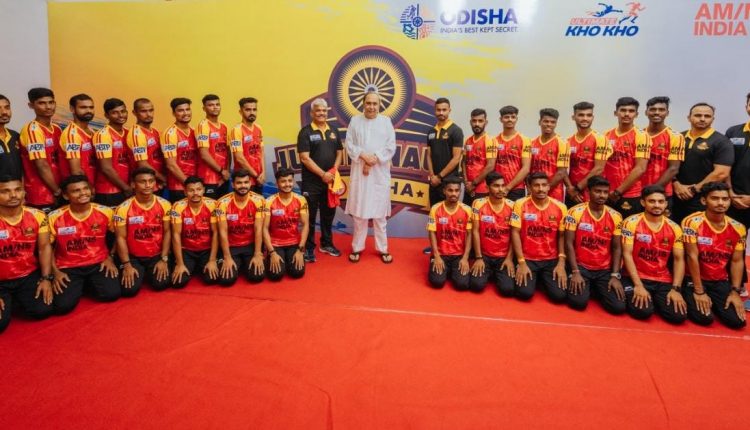 Bhubaneswar: Chief Minister Naveen Patnaik interacted with Odisha Juggernauts players on Monday, and wished them luck to bring home the trophy in the inaugural edition of Ultimate Kho Kho League.

“I congratulate and welcome each and every member to our team Odisha Juggernauts. You all are now a part of our family and I wish you the very best for the League ahead. We, your Odia fans and supporters will cheer for you from Odisha and hope to see you return with the coveted first edition trophy,” Naveen said after unveiling the jersey of Odisha Juggernauts at the Kalinga Stadium.

Besides the entire squad of the state’s franchise, Secretary to CM 5T VK Pandian, Sports Secretary Vineel Krishna and officials of Sports & Youth Services Department were present at the event.

“Development and promotion of indigenous sports like kho kho has been a focus for Odisha and the state teams have performed commendably at the national level. This venture will give added impetus to the sport in the state and draw more players especially from the rural belts,” the CM added.

The league will be played from August 14 to September 4, with Odisha Juggernauts playing their first match on August 15 in Pune.

“I am grateful that the Odisha franchise chose me as head coach for the first-season… We have a very balanced side and our pre-season camp in Bhubaneswar also went really well. Odisha has been doing really well in kho kho and they have also medals in recent junior nationals and Khelo India Youth Games,” said head coach Ashwani Kumar Sharma.

“The trust that the coaches have bestowed on me by declaring me as the captain of Odisha Juggernauts is a big achievement. This is a new team but already feels deeply connected. My prime goal would be to give our very best and keep the team together and motivated at all times,” promised captain Dipesh Vijay More.

Odisha Juggernauts franchise is owned by Odisha Sports Development and Promotion Company (OSDPC), which is collaborating with ArcelorMittal Nippon Steel India Limited (AM/NS India) and will be working closely in Ultimate Kho Kho.

There are 6 players from the state in the Odisha Juggernauts team, and 10 in the League.

IMD Prediction: India To Get Normal Rainfall In Aug-Sept; Deficit Likely In These Places