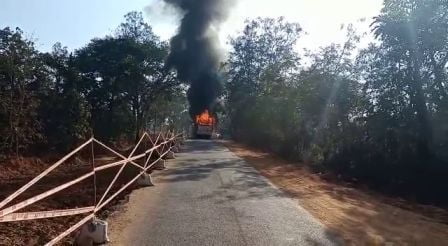 Phulbani: The passengers of a bus had a narrow escape after the vehicle caught fire in Odisha’s Kandhamal district on Monday morning.

Sources said the private bus, Rudrakali, with around 30 passengers on board was going to Bhanjanagar from Baliguda. It burst into flames near Kanjamendi market in K Nuagaon block on National Highway-59.

However, the passengers managed to get down from the burning bus.

Following information, Fire Brigade personnel from Baliguda rushed to the spot and doused the blaze.

Baliguda SDPO Manoj Pujahari said no casualties were reported. Preliminary investigation has revealed that a short-circuit started the fire, he added.