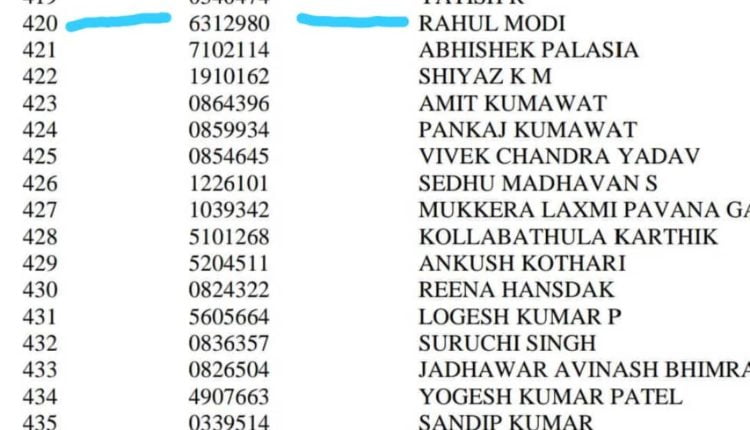 In an uncanny coincidence, a candidate named Rahul Modi who appeared for the UPSC Civil Services Exam secured rank 420 as per the results declared on Tuesday taking the internet by storm. Rahul Modi’s roll number was 6312980.

Given the current political landscape of India dotted by Prime Minister Narendra Modi and his rival Rahul Gandhi, the portmanteau (linguistic blend of words) name of the student is enough to catch eyeballs. The number ‘420’ is metaphorically used to describe a trickster.

But the fun did not stop here as the rank scored by the student adds more zest to the coincidence which looks like it was made for social media memes.

However, Twitter has the ability to find mirth where there is none. Here is how Twitteratis enjoyed the happenstance:

When life gives you Rahul, be a #RahulModi not #RahulGandhi 😂😂

Candidate name #RahulModi secured 420 Rank in #UPSC gets all the attention .

Candidate Who secured No 1 rank : pic.twitter.com/a6AzM7Whp6

Trolling him just because of his name
Isn't right.
He got this position by his hard work, it's bad to hear and see people trolling him. #Rahulmodi #UPSCResults

Are you a Congress Supporter or BJP supporter?

Single Subject Exam, Half Yearly Language Test In Odisha On…