Children Who Brought Glory To Odisha 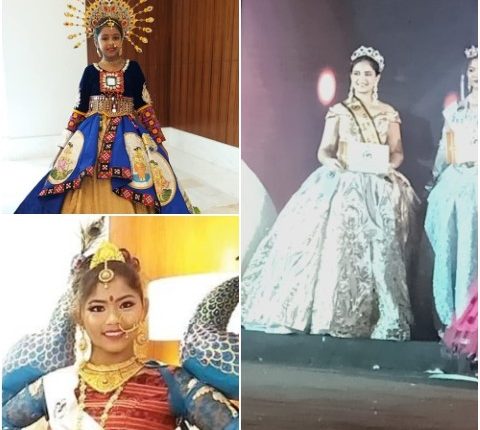 Bhubaneswar: As we celebrate Children’s Day on Thursday, let’s recall the achievements of some young talents who won laurels for Odisha.

Beauty With A Purpose

A Class X student of DAV Unit 8, Bhubaneswar, she was also the winner in the ‘pre-teens’ category (age 11-13) in the 2017 Junior Model International pageant.

Her costume, which depicted Odisha’s rich culture, was adjudged the best national costume.

Lavanya, who aims to become a civil servant, has dreams of participating in the Miss Universe pageant in future.

Sribali, a Class IV student of DAV Unit 8, Bhubaneswar, was adjudged the runners up in the Princess category in the Junior Model International contest held in Dubai.

Sribali has been modelling since she was seven. She had earlier won the ‘Little Miss Odisha International 2018’ title. She is a singer and has anchored shows as well.

Santoshini has represented India in the Junior Model International, 2019, which was held in Dubai from October 14 to 19.

She was adjudged the second runners up award in the Princess category during the event.

She is a Class III student of Vikash First-aid School in Bargarh town. She resides with her father Dinesh and mother Nupur at Shyamakali Enclave in Kali Mandir Pada.

Dipti Sharma from Jharsuguda is barely nine years old, but she has already etched her name in India Book of Records. Her feat: she can type A to Z in 3.54 seconds and that too blindfolded.

With the fastest junior blindfold typist in India tag to her name, this Class-III student of Mykidz School now aims to register herself in Guinness World Records.

Dipti’s parents hail from Rajasthan, but the family now lives in Jharsugida.

Chelsi Behura from Cuttack district was selected among the top-15 contestants in the singing reality show Indian Idol-11.

The 14-year-old girl from Nadikula Sahi in Sikharpur received a golden ticket and mike to enter the top-15 category. Earlier, she had performed beautifully in the ‘theater round’ of the show. She was selected to the theater round from the audience round by singing ‘Main Pareshan’, which was much appreciated by the juries of the show, Anu Malik, Neha Kakkar and Vishal Dadlani.

Chelsi has performed in other TV reality shows like Rising Star and Indian Idol Junior.

He has qualified for the finale of dance reality show ‘Dance Deewane Season-2’, which was aired on Colors Hindi.

Subham also received the ‘Best Chamakta Performer’ award among all the contestants who performed in the reality show.