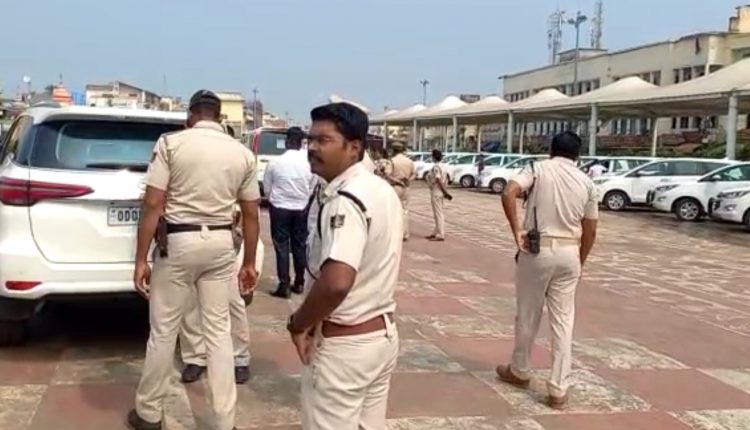 The President is scheduled to visit Puri and offer puja to deities of Jagannath Temple on Thursday. In order to ensure air-tight security for the President, police and security personnel under supervision of high rank officers carried on rehearsals from Murmu’s arrival to departure.

The IAF conducted several sorties over the helipad at Talabania and landing and take-off of its helicopter on the day. Senior Air Force officers also took stock of the areas and human habitation around the helipad. As proposed, a new entrance gate is being installed at the helipad and temporary quarters are constructed for stay of security personnel and setting up the control room.

Speaking to media persons, the SP said total 24 platoons of police force would be deployed for security of the President during her visit to the Pilgrim Town. As many as 5 SPs and Commandants, 7 additional SPs, 18 DSPs, 30 Inspectors and 110 sub-inspectors will be in charge of the security arrangement, he added.

“We are strictly following the security protocols and the guidelines issued from the Centre for the President. Security forces will deployed at all strategic points including helipad, Raj Bhavan and Jagannath temple,” he said.

Collector Verma said as per the schedule, President Murmu will land at Talabania helipad at 11.40 am on Thursday and move to Raj Bhavan. After a short break there, she will proceed to Jagannath Temple where she will stay for one hour from 12 noon to 1 pm. During her stay, Murmu will offer puja to sibling deities. Coming out of the temple, she will garland the statue of Utkalmani Gopabandhu Das at Singhadwar (Lions Gate).

From the Lions Gate, the President will go to back to Raj Bhavan where she will partake Mahaprasad from the temple. She will also hold a meeting with some prominent persons after the lunch. The President will fly back at 3 pm.

He further said public entry inside the temple will be stopped from 10.30 am for the President’s visit.

Meta To Fire 11,000 Employees, Confirms Zuckerberg; Will They Be Compensated?