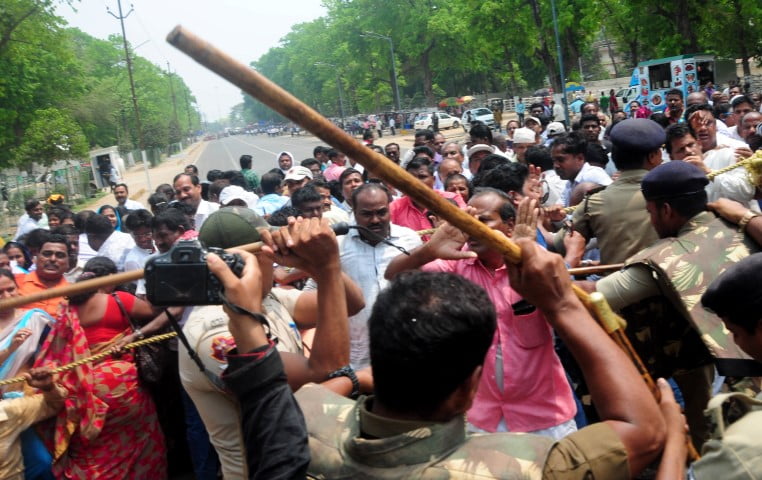 Kolkata: Esplanade area in Central Kolkata turned into a battle field as the workers of Congress and Left Front clashed with police when the latter resorted to lathi-charge to disperse them from the place during their rallies on Friday.

While the Congress took out the rally protesting against the farm bills introduced by the BJP-led Central Government, the Left Front protested against the hike in power tariff.

Demanding immediate repeal of the farm bill, West Bengal Congress president Adhir Ranjan Chowdhury said the protesting farmers are dying every day and the Centre is doing nothing for them.

“Even the apex court has given a stay at the devilish farm bills. We will submit a memorandum, addressed to the Centre, to Governor Jagdeep Dhankhar demanding immediate repeal of the bills,” said Chowdhury, adding that the atrocities by the police will soon come to an end after the Trinamool Congress loses the upcoming Assembly polls.

Leader of the Opposition in the Assembly Abdul Mannan said the rally that started from Calcutta University was peaceful, but police lathi-charged the Congress workers at Esplanade and prevented them from going near the Governor’s house.

“Our supports were manhandled by police who even took away the keys of the vehicles of several supporters so that they cannot join the protest. There were barricades all over the area to prevent us from submitting the memorandum to the Governor. The police have been working like the cadres of the ruling Trinamool Congress,” said Mannan.

Similarly, several Left Front supporters sustained injuries in the police lathi-charge during their protest in front of the CESC building against the hike in power tariff.

Talking to Odishabytes, CPI (M) leader Satarup Ghosh said the protest was peaceful but the police lathicharged the activists including women. “Police are working at the behest of the ruling Trinamool Congress. After a couple of months, we will form the government and stop such atrocities,” Ghosh said.