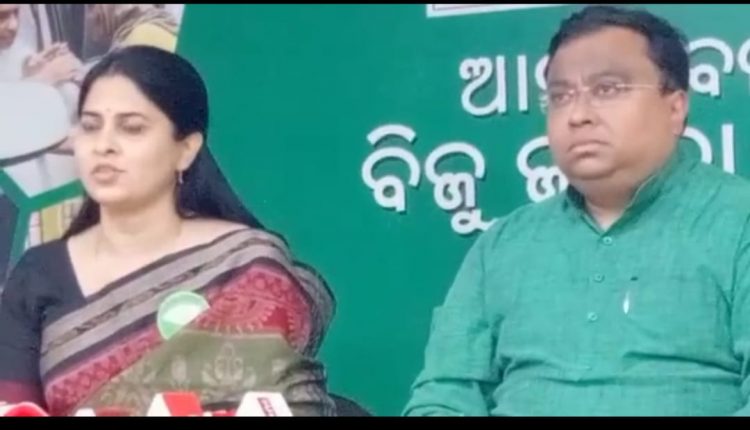 Bhubaneswar: With BJP embarking on ‘Chetavni Patra’ (letter of warning) to Chief Minister Naveen Patnaik demo over the “irregularities” in the implementation of Pradhan Mantri Awas Yojana (PMAY) in Odisha, the BJD on Wednesday accused the MPs of the saffron party from the state of conspiring to deprive the people, who elected them, from the benefits of the central rural housing scheme.

When Odisha was adjudged for best performance in rural housing by the central government, the state BJP put pressure on the Centre to stop sanctioning houses to the state under the scheme, she alleged.

Shreemayee along with party colleague and Rajya Sabha member Sasmit Patra further told a presser that Odisha needs more than 15 lakh houses but has been sanctioned only 8 lakh and the Centre is going to stop the rural housing scheme this year. “Where will these 7 lakh homeless people will go? The BJP has been crying hoarse about beneficiaries in the PMAY list, which has been prepared in accordance with the guidelines issued by the Centre. If they are unhappy, the saffron leaders, instead of shedding crocodile tears in Odisha, should seek a change in the guidelines,” they said.

The BJD leaders further said that the Centre’s guidelines provide new allotment through Palli Sabha/Gram Sabha. “There was a period for filing objections and each of these would be inquired by the state government. If the BJP felt that ineligible beneficiaries were listed or anyone was left out, they could have filed an objection or provided a list of ‘genuine’ beneficiaries,” they said.

Notably, January 24 was the last date for filing complaints over the beneficiary list.

Accusing the saffron party of indulging in negative politics, they said that the BJD government would provide houses, take care of its poor people and also expose the role played by BJP in depriving them of the benefits. “They knew that you conspired and stopped the rural housing scheme and the bashing you got in the ZP elections is there for everyone to see. It was BJD which won in all 30 districts,” they added.

The state BJP had earlier alleged that about three lakh ineligible people figure in the list of 9.5 lakh beneficiaries of the scheme and “political leanings were taken into account” while preparing it. “Many needy ones were denied houses under PMAY as they held allegiance to political parties other than the ruling BJD,” party state general secretary Prithivraj Harichandan alleged on Tuesday.

While the party has started a demonstration by sending ‘chetavni patra’ to the Chief Minister in 314 blocks of Odisha, it has threatened to further intensify its agitation if the state government goes ahead with the current list.

Outlook, Teams Services Down In India