Corona Diaries 54: It’s Not About Sushant Or Rhea Stupid, It’s Not Even About Politics 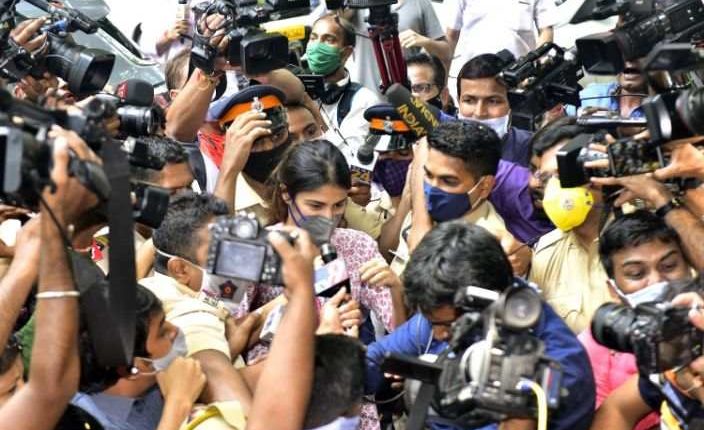 Four million up, and numbers no more shock. Everything else about the pandemic remaining where they were — no vaccine, no cure, no jobs, no halt to the slide in the economy, no good news on any other front — a distraction is what the country needed the most to escape depression. Unfortunately, it chose one dead man’s ‘depression’ as a solution to its own; worse, it turned it into mass entertainment.

More than two months after his death, Sushant Singh Rajput continues to dominate the headlines in newspapers and primetime space in other media. We still don’t know the answer to the basic question whether it was suicide or anything else. Yet new dimensions to his death continue to be ferreted out every other day. Considering the complexity the case has assumed now, there is little chance that he would be allowed to rest in peace anytime soon. Steve Huff, paranormal expert who claims to have spoken to the spirit of the actor a couple of times, is silent these days. Someone should ask him to speak to Sushant’s ghost to know whether he feels embarrassed by all the unsavoury discussion around him, including his very private matters.

But, of course, he is more or less irrelevant now. The story has long overtaken the key character and assumed a life of its own. In the time of the pandemic, it is a sumptuous distraction.

Supply, economists say, creates its own demand. A section of the media has kept the supply of gossip, which masquerades as authentic journalism, for public consumption going, delivering amazing turns and twists to his case. Now that people are hooked, they have to churn out more. The more salacious the information, the better. It began with nepotism, and in quick time has reached drugs. Now that the topmost agencies of the country — the CBI, the Enforcement Directorate, the Narcotics Control Bureau — are involved, you can expect more of it. The more the number of agencies, the more the media find ‘sources’ to quote. Of course, they are doing it for our sake. We want to know more, don’t we? And, we need a distraction.

“Don’t you journalists feel ashamed? Ask a few friends. “You keep on peddling nonsense, lies. What have you to show after two months of noise? You think people are fools? Why cannot you discuss healthcare, corona, jobs, human tragedies at a time like this?” You smile in reply and explain, “It’s simple economics my friend. As long as there are buyers, there will be sellers. Lies are like drugs, driven by demand. You will always find suppliers. To the question about the result, the answer is in TRPs. In case of some television channels, viewership has zoomed. They deliver what viewers want. Truth may not necessarily be what the latter want. It could be entertainment.”

Sushant alive would have loved to be the biggest entertainer in the country. That’s what every competent actor dreams to be. He would never have imagined that in death he would be a source of entertainment too; the way he would have hated to be. Huff better hurry. He should at least inform Sushant that some in India feel really sorry for him.

WHY IT’S MORE THAN A DEATH

There’s something baffling about the ongoing ‘war’ against Rhea Chakraborty. Going by what she faces now, she must be the biggest criminal in the country, or the biggest victim of a grand conspiracy on national scale. It is not often that someone with apparently feeble links to a suicide faces the mite of the state in such a fashion. It’s not often that someone is first pronounced guilty and then has evidence collected against one to be proved so. It’s not often that one finds public opinion so aggressively engineered against one target.

In an ideal situation, all would have waited for the multiple probes against her to be over and the courts of the country to pronounce her guilty or otherwise. In this case, the gap between the ideal and the actual is wide. It appears that the whole issue is not about Sushant or Rhea anymore; it is even beyond Bihar elections or BJP-Shiv Sena tug-of-war in Maharashtra. Rhea being punished serves a political purpose only up to a point.

There’s more and it misses the eye.

If she has politics as her next career destination, then in Sushant Singh’s death Kangana Ranaut might have found a nice launch pad. Her public profile is much bigger and brighter now. She is no more the wronged lady exploding in occasional bouts of righteous anger over isuues such as nepotism; she is a genuine counterweight to the high and the mighty in the Hindi film industry, and more. As the network of her friends and well-wishers suggests, she has outgrown the industry and is set to play a new role. The choice of adversaries drops clear hints about the direction she would go.

She is smart, and she is a go-getter. She is here for the long haul. We have to wait to watch how her new role pans out. If she eventually quits the film industry, it would be a loss though. She is such a fine actor. Sushant, wherever he is, would be bewildered at such unintended consequence of his death. He didn’t even know Kangana at a personal level.

BOW TO THE POWER OF THE MEDIA

How long will the public obsession with the Sushant death mystery continue? It is for the media to decide. Things should shift once there is something more sensational. If not anything, the entire episode highlights the incredible power of the media. They can sway people any which way they want. While being led one way or the other, and despite being manipulated, the latter would still believe they are making intelligent choices of their own on issues. This, perverse as it may sound, may be the best time to be in the media. When the audience turns into a docile herd, and disbelief is out of the equation, they fall for distractions easily.

Meanwhile, for anyone interested, COVID-19 cases in India have gone beyond four million, and deaths beyond 70,000.

Skill Test For Driving & Learner Licence In Odisha To Resume In 2-3 Days: Minister