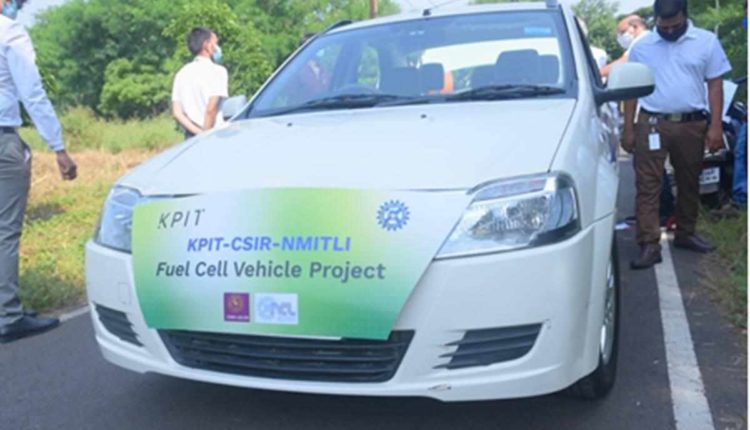 The prototype has been built on a modified Mahindra electric Verito. It has a 10 kW automotive-grade LT-PEMFC fuel cell stack that uses PEM fuel cell technology with a membrane electrode assembly. KPIT has developed its own lightweight metal bipolar plate and gasket design, balance of power (BoP), system integration, control software and electric powertrain.

The car has a Type III commercial hydrogen tank of 1.75 kg capacity stored at about 350 bar. It has a range of around 250 km running at speeds of 60-65 kmph. In comparison, the electric vehicle (EV) version of the Mahindra Verito does around 100 km per charge.

While Hydrogen has some benefits like instant refuelling while battery-powered EVs takes hours to recharge, it currently has some serious disadvantages. Here are the pros and cons:

– Currently, the source of hydrogen is natural gas and the process of extracting and transportation is energy-intensive, making the process more polluting than battery based EVs
– Fuel cells are expensive. For example, Toyota Mirai, a hydrogen-powered car, costs nearly twice that of battery-electric Hyundai Kona having a nearly similar range (around 312 miles for Mirai and 280 miles for Kona)
– Hydrogen is highly flammable, requires expensive pressurized tanks for storage
– Requires new infrastructure to build Hydrogen filling stations. Electricity for battery-powered EVs are already there
– Electricity is much cheaper than Hydrogen sold currently
– Charging EVs is getting faster. Tesla’s Superchargers can now recharge its Model 3 EV to 80 per cent in just 20 minutes.

Hydrogen is extremely energy-dense compared to batteries. In the future, if Hydrogen can be produced at lower costs and without emitting pollutants, it may be viable. The process of splitting water into Hydrogen and Oxygen using electrolysis is being used where excess renewable energy is produced to store energy in Germany.

How To Keep Coronavirus At Bay During Winter: Hear It From The Expert

All You Need to Know About India’s First Paper-Strip…