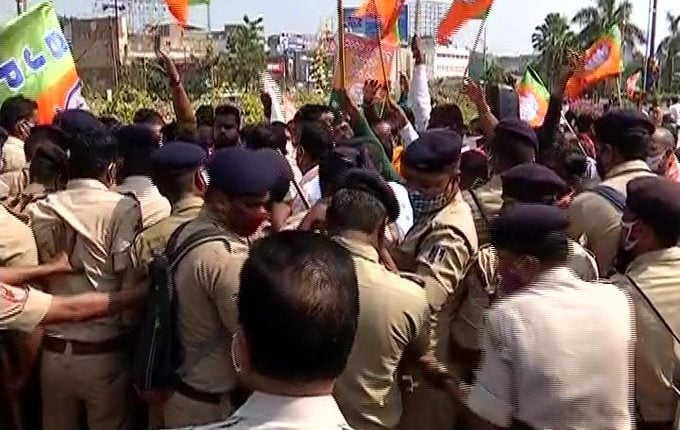 Bhubanesswar/Puri: The activists of Bharatiya Janata Party (BJP) and Mahila Morcha scuffled with police after they were stopped while taking out rally from the party office to the Assembly in Bhubaneswar over alleged custodial deaths in Puri and Biramitrapur. Police took some activists into preventive custody.

Following the Puri incident on Thursday, Leader of Opposition Pradipta Nayak, local MLA Jayant Kumar Sarangi and party MLAs met parents of victim and assured them justice. The BJP workers staged a dharna demanding arrest of the police officials responsible for the incidents.

Nayak said they demanded a judicial probe by a sitting judge of the Orissa High Court, transfer of SP, registration of murder case against the IIC of the police station concerned besides Rs 1 crore compensation to the victim’s family.

The members of District Bar Association also submitted a memorandum to the collector seeking a judicial probe into the case and to book the Inspector In-Charge IIC of the police station under Section 302 of IPC.

Inspector General (IG) in-charge S Praveen visited Puri for a spot inspection. He met Puri SP Akhileshwar Singh and senior officials to review the developments. He directed the officials to investigate the case as per the National Human Rights Commission (NHRC) guidelines.

Puri SP Akhileshwar Singh told mediapersons that the deceased, K Ramesh was arrested by Baselisahi police after a tussle while he was attempting to commit a crime in Mangalaghat area. During the scuffle, three police personnel were injured.

Ramesh was brought to the police station and later, shifted to district headquarters hospital when his condition deteriorated. He died during treatment. Ramesh was involved in five criminal cases across districts and was released on bail from a Talcher jail recently, the SP said.

However, uncle of the victim, K Ariya alleged that Ramesh was  taken away by police from his house late in the night three days ago. He died of torture in custody. The family was not allowed to see the dead body of Ramesh.

Instead of handing over the body to the family after post-mortem, police conducted the cremation under security. “By the time, we reached Swargadwar, the body was almost burnt,” said Ariya.

The SP said a case of custodial death has been registered and all norms laid down by NHRC were being followed. An additional superintendent of police and a DSP have been entrusted with the investigation.

In Birmitrapur, the victim, Md Tariq Salim was detained in connection with the kidnap of businessman Pradeep Kundu. Tariq, a resident of Karbala Road area in Birmitrapur town, was reportedly taken into custody by police from Simdega district of Jharkhand on Wednesday.

On Thursday, his health condition deteriorated and he was rushed to Rourkela Government Hospital (RGH) where he was declared dead.

But family sources said Tariq was picked up from Vedvyas of Rourkela on Wednesday and allegedly tortured, leading to his death. The incident triggered tension with locals laying siege to the police station. They demanded police officers involved in the incident to be suspended and case filed against them on murder charges.

After autopsy at Rourkela, Tariq’s body was taken to Birmitrapur in the evening. Apprehending law and order problem in the area, police removed a gathering of locals from near the Birmitrapur police station and also closed shops along National Highway 143.

Sundargarh SP Sagarika Nath said inquest of the body was done in presence of an executive magistrate and the autopsy was conducted in strict adherence to the NHRC guidelines.