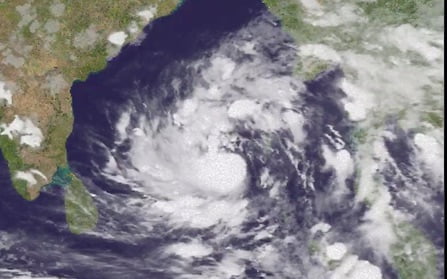 Bhubaneswar: The season’s first cyclone Asani, now upgraded into a severe cyclonic storm by the India Meteorological Department (IMD), is set to skip Odisha and move towards West Bengal and Bangladesh coasts.

At 8:30 am on Sunday, the cyclonic storm over southeast Bay of Bengal was about 480 km westnorthwest of Car Nicobar (Nicobar Islands), 400 km west of Port Blair (Andaman Islands), 940 km southeast of Visakhapatnam (Andhra Pradesh) and 1000 km south-southeast of Puri (Odisha) after moving northwestwards with a speed of 13 kmph during the past 6 hours.

Cyclone Asani saw rapid intensification at three stages on Saturday – first into a well-marked low-pressure system, a depression and into a deep depression by night, indicating the extent of warming of the Bay of Bengal this time of the year.

“Ocean heat potential is a major contributor towards the growth of storms. The entire Bay of Bengal is hotter than normal and the sea surface temperature is in excess of 30°C,” the Skymet weather agency had said.

The private forecaster further said that the cyclonic storm, which consolidated quickly, has developed a central dense overcast circular cloud mass (CDO), as a sign of intensity. “A compact core with deep convection is surrounding the CDO and low-level cyclonic circulation. Further signs of feeder bands and substantial poleward outflow suggest its intensification to a severe cyclonic storm over the next 24 hours There are no clear indications of the storm striking the coastline, as of now. It may even start moving more of north-northwestward and recurve later towards north-northeast away from the coast,” it added.

The Joint Typhoon Warning Centre had also indicated a similar path and suggested it is very likely to move parallel to the Odisha coast towards West Bengal and Bangladesh coasts.

Senior Meteorologist Jason Nicholls said that the cyclone may intensify into a severe cyclonic storm by Monday night. “Storm will near Odisha coast then upper trough can turn the storm northeast before landfall, but heavy rain possible along Odisha and WestBengal coasts later next week,” he added.

In fact, Cyclone Asani could trace a similar path to cyclone Jawad that developed in the Bay of Bengal and swerved past close to south Odisha in December last year.

According to IMD, the system is most likely to trigger heavy rainfall in several districts while brushing along the coastline of Odisha. “Rainfall activities will commence in coastal districts from May 10 evening under the impact of the cyclone, which will have intensified into the severe category,” said senior scientist of Bhubaneswar Meteorological Centre Umashankar Das.

May 11: Light to moderate rainfall is very likely at many places in coastal Odisha and heavy rainfall (7-11 cm) may occur at one or two places in Ganjam, Khurda, Puri, Jagatsinghpur and Cuttack.

May 12: Light to moderate rainfall is very likely at many places in coastal Odisha. Heavy Rainfall (7-11 cm) is expected at one or two places in Puri, Jagatsinghpur, Cuttack, Kendrapara, Bhadrak and Balasore.