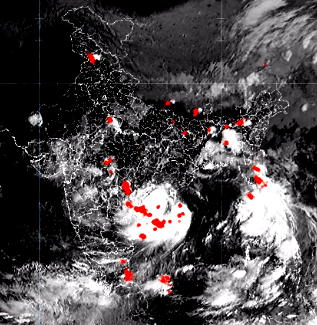 It is likely to move nearly westwards and weaken further into a depression during the next 12 hours.

Under the influence of the deep depression, heavy rainfall is likely to lash south Odisha districts and some parts of south interior districts, the Met office said.

Orange and yellow warnings have been issued for the following districts:

September 27
(Orange warning)
Heavy to very heavy rainfall at one or two places over the districts of Nabarangpur, Koraput and Malkangiri.

(Yellow warning)
Heavy rainfall at one or two places over the districts of Nuapada, Balangir, Rayagada and Kalahandi.

Squally wind, speed reaching 50-60 kmph gusting to 70 kmph will prevail over northwest and adjoining west-central Bay of Bengal during the next six hours and decrease thereafter to 40-50 gusting to 60 kmph over these areas in the subsequent 12 hours.

Gale wind speed reaching 50-60 kmph gusting to 70 kmph will prevail over Rayagada and Koraput districts and 45-55 kmph gusting to 65 kmph over Gajapati, Nabarangpur and Malkangiri districts during next six hours and gradually decrease thereafter.

Apart from this, squally wind speed reaching 40-50 kmph gusting to 60 kmph will prevail along and off the remaining parts of Odisha coast till Monday morning

Sea condition
Sea condition will be rough to very rough over Northwest and adjoining Westcentral Bay of Bengal and along and off Odisha, West Bengal and North Andlva Pradesh coasts during the next 12 hours and improve gradually thereafter.

Fishermen warning
Fishermen have been advised not to venture into sea along and off Odisha coast northwest and adjoining west-central Bay of Bengal on Monday as the sea condition will be rough to very rough.

While the Local Cautionary Signal No-3 (LC-3) has been hoisted at Gopalpur port, there is no signals  in the remaining ports of the state.