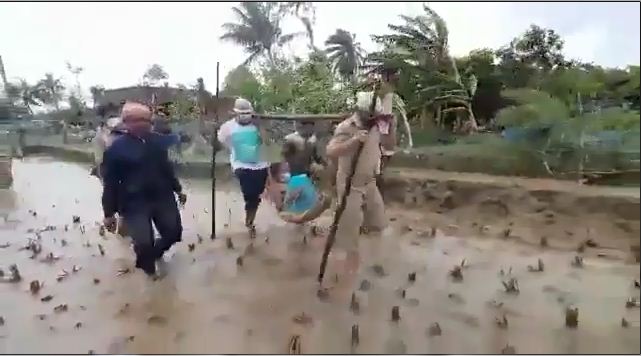 Bhubaneswar: On duty in all seasons and on the forefront during disasters, humane side of Odisha Police came to the fore once again when they came to the rescue of an elderly woman in Kendrapada district.

With the evacuation process on in full swing in low-lying and vulnerable areas in view of severe cyclonic storm Yaas, the police on duty came across a 91-year-old woman in a house at Amarabati village in Rajnagar block.

With no connectivity to the village and rain along with strong winds lashing the area, police decided to shift the woman to a shelter home on their own in a sling.

The cop crossed slippery kuccha roads and inundated agriculture fields to shift the woman safely to a shelter home.