Day Temp In Odisha To Remain 3-5°C Above Normal For 3 Days; Rain Forecast From April 3 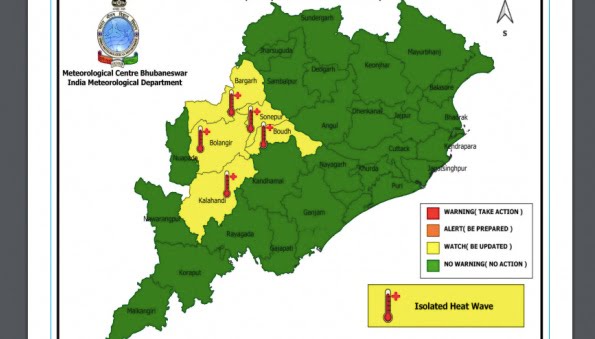 The MeT office has also issued yellow warning for Bargarh, Sonepur, Boudh, Balangir, and Kalahandi, which are likely to experience heatwave conditions on April 1.

Notably, Titlagarh, which has been topping the temperature chart for the last few days, was the hottest place in the state on Wednesday with mercury shooting up to 42.7 degree Celsius on the day from 41.5 degree on Tuesday and 40.5 degree on Monday.

While dry weather will prevail on April 2, Odisha is likely to witness rainfall activities the following two days, the IMD further said.

Light to moderate rain/ thundershower is very likely over one or two places in Bhadrak, Balasore, Keonjhar, Mayurbhanj, Jajpur, Kendrapada, Rayagada and Gajapati.

Light to moderate rain/ thundershower is very likely over one or two places over the districts of north coastal Odisha, Mayurbhanj, Keonjhar, Dhenkanal, Malkangiri, Koraput, Rayagada, Gajapati, Ganjam and Kandhamal.