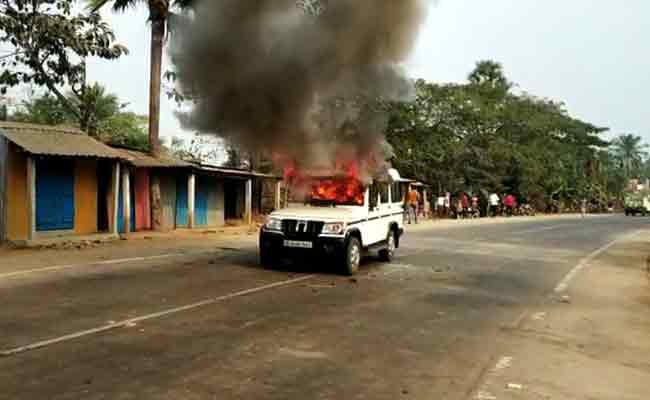 Bhadrak: Tension ran high at Hatuari village under Tihidi police limits in the district on Wednesday after the irate villagers thrashed a police team and set fire to their van following the death of a physically challenged youth.

According to sources, the physically challenged youth Bapi Mahalik of the village was on the way to his sister’s house in the morning when Tihidi police tried to nab him in connection with a coal theft case. While trying to run away, he fell into a pond near Ali Nagar Chhak. Instead of rescuing Bapi from the pond, the police went away.

On being informed, Bapi’s family members rushed to the pond to rescue him. As they failed to trace him, they informed the Fire Brigade who recovered his body from the pond.

Tension ran high in the area as the irate villagers detained a police van and severely thrashed some policemen with stones and sticks. After the policemen ran away from the place, they set their vehicle on fire.

The villagers later took the body and staged a dharna on Bhadrak-Chandbali road demanding stern action against the police.

CollabCAD Software To Be Launched For CBSE Engineering Graphics Students