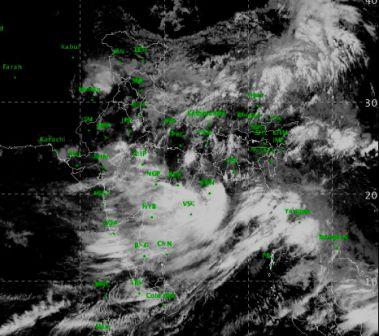 Bhubaneswar: The India Meteorological Department (IMD) on Wednesday sounded heavy to extremely heavy rainfall alert for interior Odisha in the next 24 hours under the influence of a deep depression over the Bay of Bengal.

“The depression over the north-west Bay of Bengal off the north Odisha and West Bengal coasts on Tuesday has moved north-westwards with a speed of about 5 kmph in last six hours and intensified into a deep depression and lay centred about 70 km south-east of Balasore and about 70 km south-south-west of Digha on Wednesday. It is very likely to move in the west-north-west direction and cross north Odisha and West Bengal coasts near Balasore by noon,” said the IMD in its morning bulletin.

In view of the deep depression, IMD has announced the Red, Orange and Yellow warning for the following districts for two days till August 9.

Due to the inclement weather, fishermen have been advised not to venture into northwest Bay of Bengal and along and off Odisha and West Bengal coasts during the next 24 hours.

Besides, IMD has also advised hoisting of the local cautionary signal no-3 in all the ports in the state.

Hyundai Takes The Cover Off New Grand i10