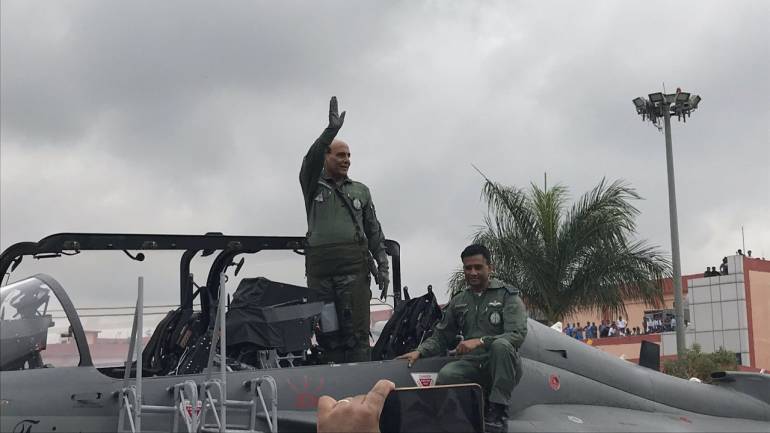 Wearing a G-suit, Rajnath Singh buckled himself into the light combat aircraft (LCA) Tejas in Bengaluru on Thursday morning, becoming the first defence minister to fly in the made-in-India fighter jet. The aircraft took off from the HAL airport in Bengaluru.

Singh, 68, walked up to the aircraft along with the pilot, climbed up the steps and strapped himself in the backseat, behind the pilot. Wearing a white helmet and an oxygen mask, the defence minister waved before the twin-seater version of Tejas took off for a 30-minute sortie, NDTV reported.

He was briefed by the pilot and other top Indian Air Force (IAF) officials. Air Vice Marshal N Tiwari was among the officers who walked him up to the jet.

The defence minister “controlled the aircraft for some time”, said G Sathish Reddy, chief of the Defence Research and Development Organisation (DRDO).

“The flight was very smooth and comfortable. I was thrilled. I chose Tejas since it is made indigenously,” Singh said after the sortie. “Some countries in South East Asia have shown interest in buying the Tejas aircraft,” he added.

The Indian Air Force (IAF) has already inducted a batch of Tejas aircraft. The naval version of the LCA is in development stage.