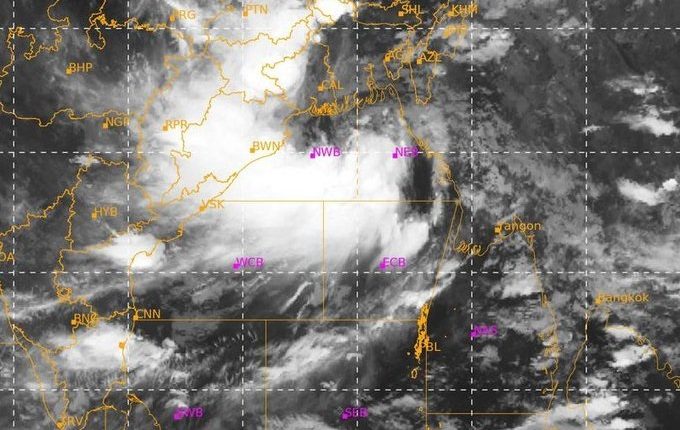 Bhubaneswar: The fresh low pressure area that has formed over the Bay of Bengal intensified into a depression on Friday morning, the India Meteorological Department (IMD)’s regional centre said.

It is likely to intensify into a deep depression in the next six hours.

“It is very likely to move west-northwestwards and intensify into a deep depression during the next six hours. Continuing to move in the same direction, it is likely to cross West Bengal and Odisha coasts between Balasore and Sagar Islands around evening of today. After landfall it would continue to move west-northwestwards across north Odisha, West Bengal and Jharkhand towards north Chhattisgarh and weaken gradually,” it said.

The US’ Joint Typhoon Warning Center (JTWC) has warned that the system has the potential to intensify into a cyclone.

“Numerical model guidance indicates that the system will track west-northwestward towards Kolkata and make landfall within the next 36-48 hours. It is expected to peak in intensity within the next 24-36 hours just before making landfall. The system is expected to track into an area of lower vertical wind shear allowing the system to further intensify. Maximum sustained surface winds are estimated at 28 to 33 knots. The potential for the development of a significant tropical cyclone within the next 24 hours is high,” the JTWC warned on Thursday.

The IMD has issued a red warning for two districts of Odisha.

Speaking to a local channel, IMD DG Mrutyunjay Mohapatra said that a red warning has been sounded for Odisha and heavy rainfall is likely to lash the state on August 19-20. North and West Odisha are likely to be affected. “Upcoming rains may further deteriorate the flood situation in the state,” he added.

Cloud band associated with the Bay of Bengal system pic.twitter.com/evT5TGXDBu