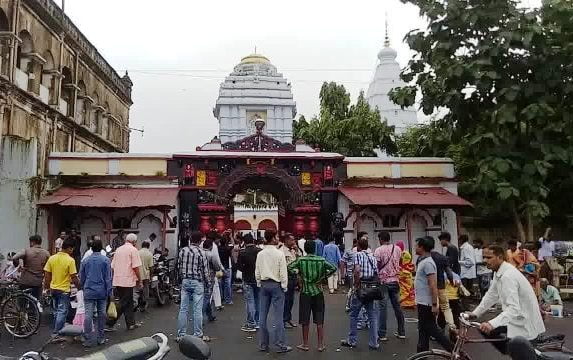 Bhawanipatna: Kalahandi district administration on Saturday announced that Chhatar Yatra at Maa Manikeswari temple on October 13 will be celebrated without participation of devotees.

Presiding a meeting on preparation for the Chhatar Yatra, district collector GP Harshad said considering the COVID situation, congregation of devotees will not be allowed during the celebration.

Section 144 of CrPC will be imposed in Bhawanipatna town and all entry points sealed on the day to prevent movement of the devotees. Five platoons of police will be deployed at the festival place to prevent any law and order problem.

However, they can see the live streaming of the rituals to be performed for the deity on TV channels and Facebook on the festival day. All the rituals of the deity will be performed by the priests as per the tradition by adhering to COVID protocols.

The collector said since thousands of animals are sacrificed during the festival, steps have been taken to promote awareness against the practice.

Additional collector Sarat Chandra Srichand, Kalahandi SP and senior officials of the administration were present at the meeting.

Intelligence Alert To Odisha Districts Ahead Of September 27 Bandh