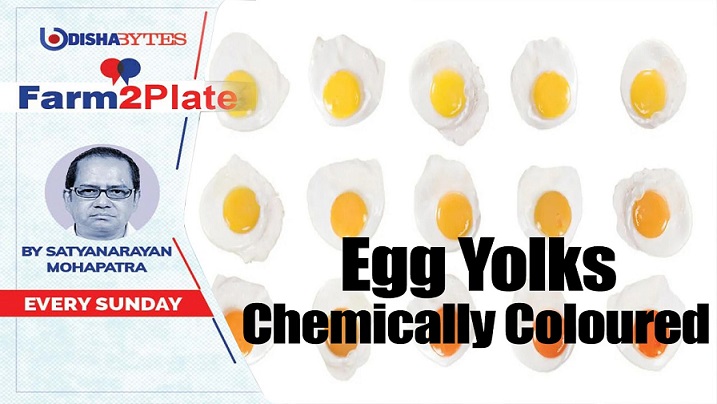 While doing a training session on FSMS, a query came from one of the participants (the stores in charge) regarding the colour of yolk from the supply they get. In their regular meeting, some of the members thought that it may be fake eggs aka plastic eggs from our neighbours. No doubt there was a huge hue and cry on this. Leaving aside, most egg-eaters believe that yellower the egg it is better and if it is orange-red it contains more vitamins and omega 3 and the least cholesterol (aka LDL). This can happen if the eggs came from chicken that roamed freely in the open field under the sun feeding on pesticide-free grass and natural insects. But now we have eggs from industries called poultries and most chickens have never seen a green field. Today, they have coined a new term ‘free range’ — instead of being kept in the cage, the chickens are brought up in the overcrowded cement floor of an enlarged coop.

A yolk can only be yellow if the chicken is in natural sunlight and eats natural food. High carotenoid foods, such as leafy greens and lucerne grass, make yolks a darker orange. Otherwise the yolk remains pale white. And the consumer believes that he is eating a bad egg. So, poultries all over the world use chemicals as yolk colour enhancers. These cosmetic food dyes are placed in feed pellets and carefully calibrated to get the desired yellow shade, or “ideal colour outcome”. In fact, egg shades cards (Roche Colour Fan) are freely available on the Net and are fed with dyes and are sold to poultries.

The “free range” and “organic” poultry dyes will make you believe that the dyes are derived from capsicum, marigold or paprika, fresh corn and turmeric, which can make the yolk look more orange. Peppers make it redder. The colour of the yolk can also inform us about the health and living conditions of the chicken. A darker orange yolk tells us that a chicken is eating a diet on open pasture, where it feeds on carotenoid-rich grasses, insects, seeds, vegetables and flowers, and so is getting enough vitamins and carotenoids from the natural pigments of plants.

Not true: they are now being fed chemicals in the form of pigments. Yolk colour has no longer any relationship to quality or nutritive value. All chickens in poultry factories are fed mainly cheap, non-nutritious grain and this produces a pale or white yolk. Poultry owners now have discovered that they can control egg yolk colour. Giving yellow vegetables, like carrots and squash, in the food increases carotenoids and xanthophylls and makes the yolk a richer colour and the feed far more nutritious. Both the chicken and egg benefit. But, natural foods are expensive products when the owner wants to sell eggs cheaply. Thus they use chemical dyes.

It serves two purposes when they use chemical dyes: they make the sick, malnourished chicken, brought up on an inappropriate diet, to make it fatter quickly, look more orange. People will sometimes refuse to buy pale meat chicken and they give the marketable yolk colour. There are thousands of sellers of these dyes today in the country. Some sell marigold extract in both powder and liquid form — India is the top seller of these dyes. Most of the cheap, synthetic carotenoid dyes are manufactured in China. Scientists have perfected 16 yolk colours in a yolk fan, which go from light yellow to intense orange and these are sold to different countries depending on consumer traditions.

Here are some of the chemicals: some are semi-natural like Lutein, which is a purified extract of xanthophylls from marigold oleoresins, or oils mixed with potassium hydroxide, methanol or propylene glycol. The resulting chemical is called Zeanthaxin. But, the majority of them are just synthetic chemicals like Rovimix Carophyll Yellow, Canthaxanthin and Xanthophyll B. Some of the dyes have iron oxides in them. Their logic for the use of chemical dyes — as poultry (chicken) cannot produce carotenoids on their own so they have to feed them, as the market prefers chickens with more orange feet and deeper coloured yolk. Feeding them with natural food like marigold petals, turmeric, etc., causes egg yolks to have varying colours and can only give a faint colouring of lemony yellow, so it is better for poultries to standardise their products and make their yolks a deep orange by using their products called Lucantin Yellow and Lucantin Red which have a chemical mysteriously called C-30.

Using chemicals is bad enough, but using banned ones is extremely dangerous. It has been found out that the poultry and its products contain dyes which are a combination of lutein and synthetic canthaxanthin and orange-II. Orange II, or Acid Orange 7, dyes are banned as it belongs to the Azo class dyes. These Azo dyes are carcinogenic. Many countries now regulate the use of azo-dyes in food products and use of these dyes in food is strongly prohibited. But they are used freely in India especially in the dyeing industry. Orange II is used in inks, paper, paint coatings and plastics. Since the chemical is cheap and freely available, and makes the egg and chicken a deep yellow/orange, it is used by irresponsible poultry producers in the entire subcontinent and especially in India.

Though natural Lutein had the best impact on colour, it’s expensive. Orange II could give the same colour and is very cheap. Lutein has no adverse impact on the birds (chicken), whereas Orange II causes severe breast muscle fibrosis in chickens. This makes their meat very chewy and inedible after the birds (chicken are slaughtered). Canthaxanthin, which is the second option, also caused fibrosis in chickens but to a lesser degree.

Without any proper regulation and monitoring the poultry owners feed their birds bad food, keep them in a state of malnutrition while pumping them with chemicals to keep them alive and artificially obese, and make the skin and eggs look healthy by colouring them. The chickens would have gotten many more nutrients if they had grazed in the open. A study showed that chickens, who grazed outside and were given natural foods, had deep yellow yolks with twice the amount of Vitamin R, Omega 3 fatty acids and 38% more Vitamin A than factory farmed eggs.

Caution: when you eat the deep yellow yolk from the poultry industry, you could be paving the way to cancer.

For the road: fake egg shells are being made with calcium carbonate, paraffin wax and gypsum powder, while egg yolk and egg white are being made of sodium alginate, alum, gelatin, edible calcium chloride, benzoic acid, water and food colouring.

At first glance it is very difficult to differentiate between fake and real chicken eggs. Here are a few tips to do a fast check: To start with, the shells of fake eggs are shinier than real ones; While shaking the egg before breaking if there is water overflowing noise then it is a fake one. Unlike real ones, the egg yolk and white will mix together as soon as you break it and pour on a pan as both are made of the same substance and the yolk spreads without one touching it. The real eggs have a raw smell while fake eggs are odourless. When the shell is put on fire it will catch fire or start to melt with a plastic like odour coming out of it.