Entire Villages In Odisha Getting Washed Away Due To Rising Sea Level, Warn Experts At SOA Seminar 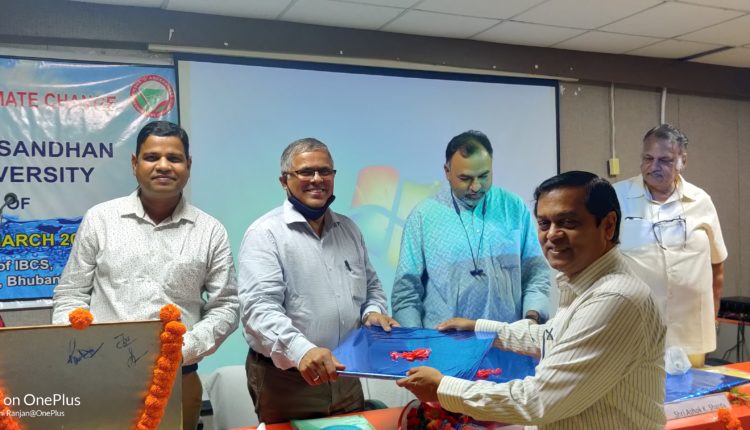 Bhubaneswar: Experts have warned that climate change has already started to have a vicious impact on humanity calling for urgent measures to arrest and reverse the trend. Human activities were the greatest contributing factors, they pointed out.

“Rising sea levels caused by global warming have begun to gobble up villages in Odisha while indiscriminate use of water could lead to an unimaginable situation in the future,” Ranjan K. Panda, Convenor of Combat Climate Change Network, India, said on Monday.

Seven villages in the Satbhaya area of coastal Kendrapara district in Odisha have been devoured by an advancing sea while several villages in Astaranga block of Puri district are facing the same fate, Panda, also known as the ‘Waterman of Odisha’, said while speaking at a seminar on ‘Global Water Crisis and Climate Change’ organised by the Institute of Computer and Business Studies (IBCS), faculty of management sciences of SOA, to mark the World Water Day.

The Bay of Bengal has been advancing by a few meters in the coastal areas after every cyclone, while saline water ingress has been noticed up to a distance of five km from the sea in Astaranga area, Panda, a researcher, environmentalist and activist, said.

Stating that nearly two billion people had no access to safe water resources, Panda said large groups of people had little water to meet their needs even as they were advised to wash their hands frequently due to COVID-19.

“People must understand that they have to live in harmony with nature and rivers are not pipes which can be bent. We have become unsustainable. I now belong to a credit card generation as I am using the water, which belongs to my grandchildren,” he said.

The call of the hour is to protect our forests and plant more trees while being water prudent, he said.

Climate change is resulting in extreme weather events that cause highly destructive floods in the urban areas for which humans are responsible, Sahu said adding activities like removal of water-absorbing plant cover from the soil and construction of buildings on flood plains adjacent to rivers led to the frequent catastrophes.

The urban population, which stood at 41 per cent in 2015 is expected to rise to 56 per cent in 2030 which would further accentuate the situation while climate change is expected to have more severe repercussions in the future. The length of the summer season, now experienced for three months, could extend to seven months by 2030 while India’s perennial rivers may get reduced from 17 now to 6.

The development would have a long-term effect on human health and expenditure on health care could rise from seven per cent of the income now to 20 per cent by 2030, Dr. Sahu said.

Sharda stressed the need to bring down emission levels to counter global warming saying India had agreed to reduce emission to the 2005 level by 2030. Shifting the focus to solar power generation could provide a boost to the efforts to combat climate change while there was a need to expand the forest cover by five million hectares every year, he said.

No Restriction On Movement Of People, Goods Under New COVID Guidelines, Says MHA

State NSS Award For Professor & Student Of SOA In…