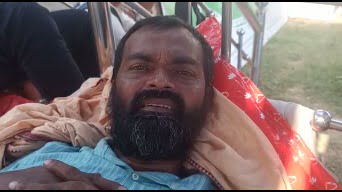 Kendrapada: An environmental activist, who was on hunger strike for the last six days against the mega drinking water project over river Kharasrota in the district, was forced to break the fast on Sunday.
The activist, Srikant Nayak, who was on the strike near Mahatma Gandhi Statue close to the residence of Kendrapada collector, was forcibly taken by police and admitted to a local hospital. The police also detained 8 activists from the place.
Srikant has been opposing the project on the ground of its adverse environmental impact. He said the two places of the project – Barunadiha under Rajkanika block of Kendrapada district and Nuahat under Chandabali block of Bhadrak district – come under eco-sensitive zone of Bhitarkanika National Park.
Srikant, who is also a representative of ‘Sambhabana’, an NGO, said after 40% of the project work was completed, Sambhabana raised objection on the ground that prior permission of Bhitarkanika eco-sensitive zone monitoring committee was not obtained.
Following the objection, Kendrapada collector, who is also Chairman of Bhitarkanika Eco-sensitive Zone Monitoring Committee, convened two meetings on December 3 and 15 last year. At the meeting, the NGO pointed out that if the project comes up, the flow of fresh water to Bhitarkanika will be reduced.
Stating that reduced water flow will affect the mangrove ecosystem seriously as mangrove forest needs 40% inflow of fresh water, the NGO demanded appointment of a team of expert environmentalists to study the impact of project on the biodiversity of mangrove forest.
But the views of Sambhabana were not considered and resolution was passed at the meeting with a malafide intention of the collector, alleged Srikant,
He also pointed out that Aul and Rajkanika blocks are saline as per a survey of the Central government which had included Kendrapada district in Jal Shakti Mission as its ground water level was very poor.
He claimed that the project will lift 142 million litre water per day, while 25 million litre of drinking water per day is required as per calculation of Rajiv Gandhi Drinking Water Mission. The rest 117 million litre will be diverted to industrial area of Dhamra Port at the cost of Bhitarkanika eco-sensitive zone. If such huge amount of water is diverted from Kharasrota, the river will turn saline like river Baitarani in 5 to 10 years, he added.
It may be noted that the Congress on Saturday formed a fact-finding team to probe into the arrest of 24 people following a violent incident at project site near Bharigada in the district on Thursday.

Why Libraries Are The Lungs Of A Democracy?

Who Was The Target Of Contract Killer Sampad Sahu In…