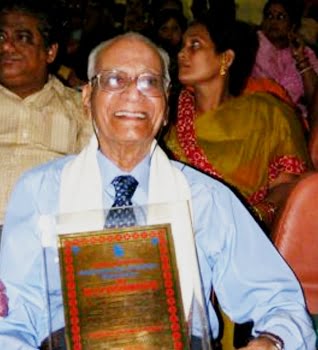 Bhubaneswar: The first Director General of Doordarshan and former Director of the Cuttack Akashvani Kendra, PV Krishnamoorthy, passed away at his residence in Chennai on Wednesday afternoon at the age of 98. He had played a vital role in popularising Odia culture.

Born in Yangon, Myanmar, on April 1, 1921, Krishnamoorthy graduated in English Literature and joined the External Services Division of All India Radio (AIR), as a news reader/announcer in 1944 as a World War II refugee. Later, he was appointed as Station Director of AIR in Chennai and Kolkata and Doordarshan Kendra in New Delhi and Mumbai.

It is said that the cultural revolution in Odisha began during Krishnamoorthy’s two-year stint as Director of Akashvani Kendra, Cuttack (May 24, 1958 – October 18, 1960). He played a vital role in the grooming of eminent artists including Sangeet Sudhakar Balakrushna Das, Pandit Bhubaneswar Mishra, eminent flutists Pandit Hariprasad Chaurasia, Akshaya Mohanty, Pranab Patnaik and Sikandar Alam.

Apart from this, Krishnamoorthy was a pioneer in the propagation of Odissi dance. He had played a major role in introducing and motivating the legendary Odissi guru Kelucharan Mahapatra.

With his two able assistants, Gopal Chhotray and Suren Mohanty, the Cuttack Akashvani Kendra had aired a series of operas and dramas during his tenure.

Kandhamal’s Whiz Kid Floors Everyone With Her Knowledge