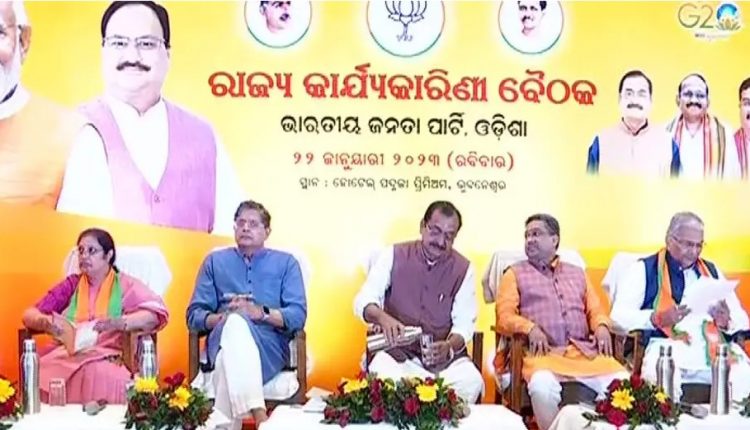 Bhubaneswar: The Odisha unit of Bharatiya Janata Party (BJP) has resolved to ensure overall development of the state through clean and transparent administration after throwing the ‘insensitive and corrupt’ BJD in next Assembly elections.

The resolution was passed by BJP on the second day of its two-day state executive meeting in Bhubaneswar on Sunday. In its political resolution, the party stated that though Odisha is endowed with rich natural resources, it has remained backward due to anti-people policy and corrupt practices by the ruling BJD which has remained in power for 23 years.

The main opposition party in the state said the peace-loving people of Odisha have been subjected to lawlessness as the ministers and leaders of the ruling party are directly or indirectly involved in heninous crimes and patronise the criminals. The police, which are responsible to ensure protection of the life and people, are acting to the tune of the BJD leaders.

“According to an observation of the Supreme Court, Odisha remains at the top among the states in reporting cases of the rape, kidnap of minor girls and torture of women. As many as 9 cases of rape and 8 murders are reported in the state everyday. The state has emerged as a major centre of smuggling of narcotics like ganja, brown sugar cocaine and heroin though chief minister himself holds the home portfolio,” said the BJP.

Coming down heavily on the BJD government’s economic policy, the BJP said the unemployment rate in the state is far more than the national average. Due to the government’s anti-youth policy, the retired persons are allowed to continue in their jobs while lakhs of posts remain vacant.

The saffron party also targeted the government for failing to carry out industrial development of the state despite heavy investment intent. “While the Make In Odisha (MIO) conclave in 2016 and 2018 attracted total investment of Rs 6.26 lakh crore, the government has been able to utilise only Rs 5,674 crore which account for 1% of the total investment. Similarly, the second edition of MIO promised generation of 7,28,681 jobs, only 5,878 persons have been employed so far,” it said.

“It is a matter of regret that a Union Territory like Dadra, Nagar Haveli, Daman and Diu could attract Rs 15 crore foreign direct investment (FDI), Odisha under BJD rule received Rs 14.8 crore,” it added.

Despite Odisha being an agrarian state with adequate water resources, the farmers are forced to resort to distres sale of their produce due to corrupt practices in mandis and lack of adequate cold storages, the BJP’s political resolution said.

“Though the government had announced to streamline the mandi system in the government by November last year, it has failed to do so and in addition to that the outlets were opened one month late. For delay in issuing tokens, the farmers are forced to sell paddy to middlemen at far less cost,” the BJP said.

While the state government has failed to ensure the minimum support price of paddy at Rs 2040 per quintal, the chief minister’s announcement of giving Rs 100 as bonus remains unfulfilled. Besides, more than 18 lakh farmers remain deprived of getting the benefits of the Centre’s PM Kisan scheme for indifferent attitude of the BJD government, the party said.

Stating that the education system in Odisha has collapsed, the BJP said of the total 6,193 high schools in the state, 1800 schools do not have headmasters. Nearly 90% of those do not have laboratory equipment. It is a matter of concern that while the schools lack basic sports gadgets and amenities, the government is spending crores of rupees in organising world cup.

“While the government spent Rs 68 crore in 2018 World Cup and Rs 1100 crore for own advertisement, 50% of the amount could have gone a long way in strengthening the sports facilities in the schools,” said the BJP.

The BJP termed the arrest of some junior level officials like clerks, RI and assistant engineers by Vigilance on daily basis as a window dressing of the government to show its clean image while big contracts were awarded to the companies outside the state to fund the BJD through illegal means.

The government remains silent on returning the hard-earned money of the people duped by chit fund scam while the mining scam has been pushed under the carpet, the opposition party said.

The BJP, in its political resolution, also pointed out insecurity and exploitation of women, iregularities in PM Awas Yojana, health services and negligence of tribals and other backward communities in Odisha.