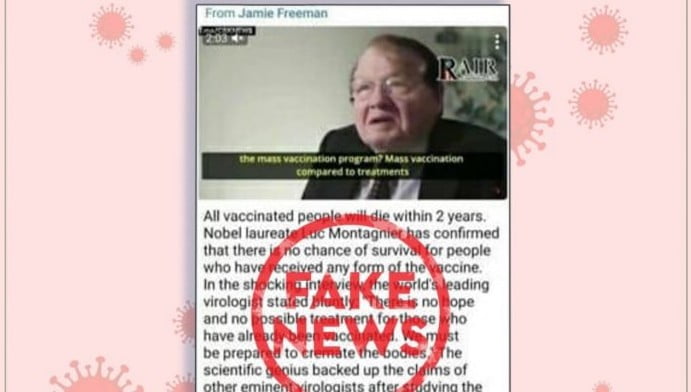 A viral message claiming that French virologist and Nobel laureate Luc Montagnier has said all people getting vaccinated against COVID will die within two years of vaccination is doing the rounds on social media.

“Nobel Prize Winner Luc Montagnier has confirmed that there is no chance of survival for people who have received any form of the vaccine. In the shocking interview, the world’s top virologist stated blankly: ‘There is no hope and no possible treatment for those who have been vaccinated already. We must be prepared to incinerate the bodies’,” the message reads.

It also says the claims are backed by other virologists. “They will all die from antibody-dependent enhancement. Nothing more can be said,” the message says quoting him.

Some have also shared a video of his interview with RAIR Foundation, USA, where he is heard saying, “It’s an enormous mistake, isn’t it? A scientific error as well as a medical error. It is an unacceptable mistake. The history books will show that because it is the vaccination that is creating the variants.”

No, the claim is false. The virologist has talked about “antibody-dependent enhancement” as a problem in an article named “Bombshell: Nobel Prize Winner Reveals – COVID Vaccine is ‘Creating Variants'” published by RAIR Foundation.

He said mass vaccination is leading to the creation of variants forcing the virus to finds solution or die. This is where the virus mutates.

However, Montagnier has nowhere said that vaccinated people will die within two years. Neither has he said, “There is no hope and no possible treatment for those who have been vaccinated already. We must be prepared to incinerate the bodies.”

PIB’s fact check handle has also ruled it as fake and asked people not to forward the message.

The claim in the image is #FAKE. #COVID19 Vaccine is completely safe

Other experts have dismissed this theory. Sophie Lucas, immunologist and president of the Institut de Duve at UCLouvain, pointed out that the UK variant came up in September 2020, when vaccines were not rolled out. Hence she concluded  there’s no direct correlation between emerging variants and vaccines.

This is not the first controversy Montagnier has been involved in. The 2008 Nobel prize winner in medicine had claimed the COVID-19 virus is lab-made. He has made questionable statements such as claiming DNA emits “electromagnetic waves”. He is known to have lost credibility among his peers after his grants were rejected around Europe. He has supported anti-vaxxers, homeopathy and other controversial things. In 2010, he said he was leaving Europe to “escape the intellectual terror.” He was apparently not allowed to work in any public institute in France.